So I've clocked enough hours into the racket to give the review a go.

I use this rackets for singles play

Defense
Despite being 3U, the racket feels considerably light to handle. Compared to the other two singles rackets that I hold it's definitely the lightest of the lot. Having a big head helps too since it means I get less mis-hits. The added weight to the front coz of the head-heaviness means better defense for me, and with better placed shots (also because of the big head) it's a good feeling.

Power
I'll put the emphasis on the sweet spot now. I'll call it the zone of your hitting area on your racket head that allows the strings maximum repulsion and stretch (hope this definition is accurate coz I'm a little lazy to go check online). The Prince OVERSIZE Black offers a larger sweet spot, so a lot of the offensive shots I make come off really well.

Did I also mention that you get a sweet-ass sound when you hit the sweet spot (hence the namesake; citation seriously need)? If you're looking to turn heads and *ahem* scare the opponents into thinking your hits came off really hard and fast, you might want to give the Oversize Black a try.

The high flex also gives more power to my full smashes (much less to be desired for my wrist ones thought). Combine the illusion of a big hit (loud sound!) with the actual speed of a big hit and you've got one cautious opponent!

Control
Being a little light, I found the racket requires a little more work than the other singles rackets that I use. Despite that, I've been able to place shots quite well (big head big head big head) and that's a good trade-off for the little bit of extra work I have to go to get that crosscourt clear.

But! After a few games (I usually play 2 hours of singles at a go with a buddy of mine) I noticed that I needed more and more work to make the full clear, and errors then set in. Totally a player problem, but at that time I wished I had a heavier racket...

Looks
Who here likes gold and black with white strings and a white handle? I do. :)

Prince badminton rackets tend to have a chrome finish to it (at least the ones I've seen anyway), and that makes using such a sweet looker a whole lot better.

Comparison
I've got 2 other singles rackets, the ArcSaber Z-Slash and the Voltric 5, but I'll just use the ArcSaber for comparison purpose since I've not had much time with the Voltric.

The Prince Oversize Black definitely has an edge when it comes to accuracy and control because of the bigger head (looks like I've got to do a little more training in this area), but after saying that I've noticed that the Z-Slash's swings come off faster and produces smashes that are a little harder to return.

While things are overall a little easier with the Prince, I feel that when it comes to performance, the Z-Slash still comes up tops (after a whole hell of a lot of taming). Not to say that the Oversize Black's a sub-par racket, but at 1/3 the price, it's definitely worth trying out. 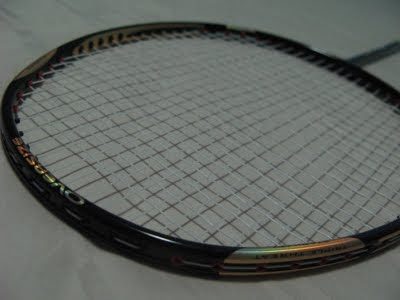 Nice review...but there's a 'Carlton' part in it =P

Anyways some things worth to clarify, High flex in Prince rackets is equal to stiff in other rackets standard.

And the chrome finishing is really great and durable...at least for my Black Pearl XP.

Thanks for clarifying! It certainly feels more flexible than my Z-Slash though... goes to show I've a lot more to learn in the ways of the racket. ha!