I got a morning of singles play with this racket and feel like it's enough to write up about it.

I would say this racket is suitable for both doubles and singles play.

Defense
I have good things to say about the even weight balance of the Air Rage Tour, and I might as well start with the defense capabilities. Even though I found the handle of the racket a little longer than the usual ones I have, it soon because an afterthought with the good defense that this racket gave.

I still found myself wishing the handle was a little shorter (I tend to hold upwards on defense and that kinda reduces the reach of this racket in particular), but overall good!

Attack
I gave this racket the nickname of Tiger due to the dominantly yellow design and vicious sounding smash. I credit the strings a little (28lbs!) but I guess a bulk of the credit has to go to the engineers at Carlton for making such a powerful racket.

A visit to the Carlton website will see that they gave the Air Rage Tour a high power rating. I can vouch for that one!

Control
I was surprised that I could clear better with the racket than with my Yonex ArcSaber Z-Slash. Although I had a little control loss on the distance occasionally, the power to sent the shuttle back was certainly there.

I also posted a few days back that even-balanced rackets suffered from a little control loss, and it felt that way with the Air Rage Tour. It took awhile to place the shots around the court, and even then I couldn't get a good fix on the distance and direction towards the end of the sessions.

Drops from the back were sometimes missed as well, hitting short of the net at times. I'd say my netplay suffered a significant decrease in accuracy. Service with this racket was also noticeably harder.

I'll put this down to my lack of skills, but then again this review is based on my experience and I found that this racket gave me less control than the others I own.

Looks
Tiger comes with yellow with black and grey markings down the sides of the head. The shaft breaks into a nice grey/yellow/black patterning that ends off with the chrome cap en-lined with yellow paint down the four sides.

Added the black strings and a black grip to complete the look.

Comparison
I don't feel quite as comfortable with this racket than with some of the others I have, and I think it's mainly because of the control issue. I asked my stringer for his advise and he shrugs it off a just a matter of getting used to an even-balanced racket.

I've been on the heavy heads from the start, so I'll be giving this aspect of the Air Rage Tour a little more time for development and maturity.

Hopefully in time I can fully harness the potential of this lovely piece of engineering. 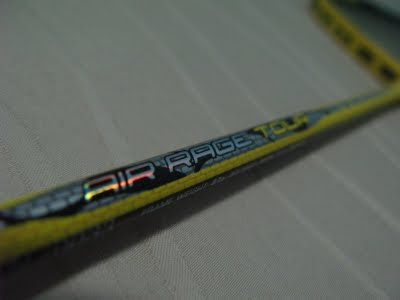 Hi there! Thanks a lot for your great review. I love Carlton rackets, too. I own 2 Vapour Trail Tour 2011. I broke one of them yesterday, and I was considering buying the new one from the 2012 colection. However, I've always been in love with this Air Rage Tour, but never decided to give it a go. In fact this ART is quite similar to the VTT in terms of specs, but has a little more of power at the expense of control.

Now that you've had more time to use it, how do you feel for it? Thanks a lot in advance. This will definitely help me decide.

Hello! Thank you for the affirmation.

Real sorry for the broken racket. I've been wanting to give the VTT a go for awhile too, but it's impossible to find in my country.

I found the Air Rage Tour quite the racket if you're the kind of player who likes to counter attack.

The long reach of the racket and the light weight gives it a nice advantage over the rest of the rackets that I own.

And as with all rackets, the more you use, the more control you get out of them.

If it's affordable, I'd suggest giving it a try. :)

Old thread I know, but having used the Air Rage as my main racket for the last few months, I thought i'd add a brief review.

Its a powerful racket. Yes, some control is lost, but thats to be expected.

As a more aggressive player I certainly prefer the extra power. It helps ground those smashes, and sounds good too!

You can feel the vibrations more through this racket than those I have previously used, but with the addition of a decent grip its soon dampened.

It has improved my defensive clearances - expecially on the backhand - and makes a fast singles game more a game of positioning than a tough, defensive slog.

Thanks for the review! Agree with you, but for the last part. I'm more used to something less loose for singles.

But because of what you said, I'll bring the Air Rage Tour out of the closet for a swing at tomorrow's doubles session :)

Any further thoughts on the racket?

I feel mine has lost some of its power. Perhaps psychological, in that ive just got used to it, but im thinking it could be the (stock) string tension relaxing?

So my question is: any thoughts on the above, and of a good string to put on this racket (and tension)?

I found that the racket is pretty good for defensive counters and drives.

Could turn away smashes pretty well that day on the courts.

As for the strings, it's really down to a personal choice. I would go for a high repulsion string like the BG66 Ultimax or the NBG98.