I've been uncertain about this racket, and that has resulted in more games than usual with it before I commit to a review. I've played singles with it for the last three sessions and here's what I have to say about it.

Let me first state that I'm no pro, and this is just my evaluation of the racket to my playing style and experience with it. If anything, I'm a high-beginner level player looking to improve myself by playing more often and taking the lessons that I learn from the court away with me as pointers for the next session.

Defense
I expected great things from something this light, and it didn't disappoint. Despite the heavyheadedness of the frame, I could feel the weight dissipate as the racket cut through the air. At 70g, the superlight construction definitely increased my defense capability.

But the light weight does have its set-back. I had a little trouble generating enough power to convert defense into an opportunity to attack. When I try to lift behind the attacker, I ended up giving him a second chance. And when I tried to rectify that with a little more wrist, the shuttle flew out of court.

Control
Which brings me to the next point about control. I've said before that I believe that the weight of the racket affects the amount of control that the player can exert over the shuttle, and for this case it's very evident.

Drop shots, smashes, net shots, lifts, clears and defence - all of them suffered from the lack of control that this rackets gives. I also took into consideration the tension on the strings and 26lbs on a superlight frame might cause a little control loss.

It actually had me thinking more on how to keep the shuttle in than where to put it, and that's a battle lost.

Usually I put out-of-control shots down to my lack of skill, but this one had one too many for me not to put the blame on.

Attack
I wrote on top that the racket is extremely head heavy, and that translates into the smashes, clears and drives that this racket can deliver. Although I feel that if the M-Tec 70 was strung at a lower tension I'd get even better offence, the current state is more than required for a nice game of attack.

Looks
Black and white were always the favorite colors when it comes to badminton rackets, and Karakal delivers with the M-Tec 70. The racket comes primarily white with black tribal markings down the sides of the head, ending off with the logo at the t-joint, with technology decals cascading down the shaft onto the handle.

Comparison
This is the lightest racket that I now have, with the APACS WREX Punch coming in a close second.

I remember I had the same problem with the WREX Punch - lack of control, but the Karakal makes up for it with the high energy hits that it can generate with such little effort.

But when you compare it to the 3U, head-heavy big boys, the Karakal comes out short with its lack of direction and overall ease of mind that the others give me. I guess 6U is too much for me to take. 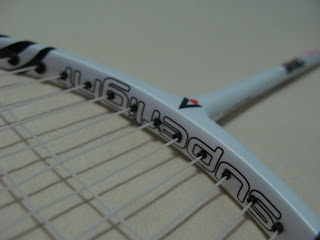 have you tried the Karakal sl 70 gel? if so whats it like?

Sorry dude, I've not had the chance to get my hands on that one, but from general theory it should give a faster swing and greater control due to the small sweet spot.

However, that also means you'll need some time to tame the racket since it's a conventional oval head frame.