I love Carlton rackets. They're not high and mighty like Yonex is, and so their rackets are nicely priced for the amount of quality that they give. I've got a few of them up on my wall, and I've only ever been kinda disappointed by one of them (which I hope to soon fix...).

In the previous tries with this racket I've commented on its speed and agility, but also the lack of power to get the shot done. Here's a more complete view of the racket.

With that said, on to the review.

I've mainly use this racket for doubles play.

Defense:
This racket is among the fastest I have in my arsenal. Taking action at the net is easy with the Air Blade 30, and it gives me the confidence to be able to step up and stand my ground. The light weight of the racket allows fast movements and increased reaction speed.

The heavy head added to this by giving the added power boost for when you need it. Receiving smashes and sending the shuttle far to the other corner are simpler and effective, though at times I find the drives and pushes a little lacking in distance.

But fast straight drives to the opponent are brilliant because of the maneuverability, and that is what my doubles game is all about.

Attack
The Air Blade 30 comes with a shorter handle, and that makes you hold the racket at the maximum allowed length which translate to the most amount of power when it comes to smashing. Despite being light weight (easily 10-15g) lighter than most singles racket, the Carlton racket packs quite the punch though nowhere as potent as its 3U counterparts.

Another thing that caught my attention was the yellow rubber grommets at the 3 and 9 o'clock positions, which reminds me of the V12 grommets from the earlier Carlton Vapour Trail and Air Rage series. The principle behind this is that the softer grommets allow for more stretching of the string (perhaps to simulate lower tension) which translate to higher repulsion and power from strings even at higher tensions.

Control
Just as you would expect from a Carlton racket, the Air Blade 30 handles with ease, giving you more time to think about strategy than worrying about whether you're hitting the shuttle right.

Carlton has somehow managed to make the racket in just the right way that it gives you the most of everything you need and makes the game a whole lot easier and fun.

Drops to the net and tight net shots come off the arm like second nature. I was able to feel the shuttle right off the strings and confidently move to the next anticipated spot ready for the return.

But the light weight of the racket plays to your disadvantage when you need to send the shuttle far from the backcourt. Often I find myself using more strength than usual and watching a less than satisfactory shot being delivered.

Good thing the speed allows for a little saving grace following the setup for my opponent...

Looks
This is a fierce-looking racket, with red and black as it's primary color set. Yellow streaks run down the head, adding to the fiery image, and the light hint of gold and silver delivers the swiftness. Dark Vengeance.

Comparison
The last doubles racket I used was the Victor Meteor X80, which gave more powerful shots due to its super stiff shaft. The Carlton Air Blade certainly loses out in the power department, but I think the speed that this racket offers kinda of suits a more defensive game in which you plan to move the opponents around the front of the net. 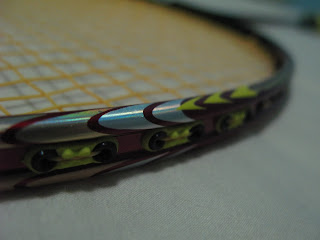