I've always doubted Victor rackets. Something about Taiwanese graphite versus Japanese graphite and that whole experience with the Spira 21 left me thinking that it's just a whole lot of marketing by the Korean National Team.

The chance came to get this racket at a reasonable price, and I jumped to see what it could do. The racket was of the lighter build, and I took it to my doubles games.

Initial experiences were pleasant, and here's the full-on.

Defense
Being 4U, this racket was naturally quick on the get-go. There wasn't any need to get accustomed to the weight and swing speed, so I'll say the MX80 is a pretty nice racket to just pick up and go. Very forgiving, and very gentle on the arms despite being very stiff.

The weight in the head can hardly be felt when you swing it, but the moment the strings come into contact with the shuttle you can feel the power from the shaft going to the shuttle; a quick flick of the wrist is all you need to make the shuttle travel to the far ends of the court, and I found myself throwing the angles a little too much sometimes.

That being said, receiving smashes with the Victor Meteor X80 is a breeze. The light weight allowed quicker response from the wrist and the weight transfer upon hitting took care of the distance.

Thanks for the weight transfer, clearing to the backcourts were also easy, even if I were thrown off position and had to force a clear from a lower angle.

Attack
Head-Heavy + very stiff = very good for smashing. Quick drops, fast smashes, check smashes and drives, all good with the MX80. I was comfortable with the speed of the smashes, which were reasonably hard to return.

This coming from a 4U racket is good enough for me. I'm not a hard hitter so this one's not very vital.

Control
I would like to add that the grip size for the MX80 seems a scale lower than the Yonex equivalent. For example, I've found Yonex's G6 to be like Victor's G2.

That's a good thing, because the MX80's smaller grip size gave me loads of control around the court. From performing the deceptive drop shots to placing the smashes down the line, I've got a pretty good grasp of direction as far as the MX80 goes.

One thing I did observe was that because of the lighter weight of the 4U racket, I've seen myself throw the shuttle off the sides a little too much. Might want to take better control of the wrist for future games.

Looks
I also have a thing for cell-shaded graphics, and the Meteor 80 fit right in. Somewhat similar to the Yonex Voltric 80 in color scheme (and some might argue, design), the MX80 is definitely a looker.

Red, black, white and GOLD in a combination of ferocity and swiftness. Quick, sharp edges dominate the principal markings on the racket shaft and head, with the grand touch of gold shaded to accord it the higher.

Comparison
I'm going to pit the Victor MX80 against the Carlton Fireblade FX8, which I find to be more of lass the go-to racket for me if I wanted to have a good game.

The MX80 wins in the speed department; I found myself vexing the weight of the FX8 after I picked it up for a game of singles right off a couple of doubles. From then on, the FX8 just felt too heavy and not very comfortable to use and control.

Using the MX80 for singles games, I felt that I missed the ease of control that came with the FX8. There were instances where I could've pushed the shuttle further and hit a little harder if I had the added weight of the Carlton Fireblade with me.

But since this is a doubles racket, I'd like to compare it with the S-Lite. But first I'll have to get more playtime off the Carlton head-light racket. 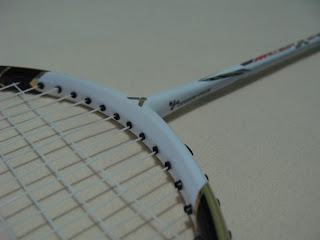 wow :o
i recently got sponsored by victor
and i asked them to send me two MX80s after reading this review

Great stuff! I hope you enjoyed the racket as much as I did!!

wow nice review how much is that racket in your country?

Thanks for reading! The price varies between stores, but it'll probably set you back about UD$150 with stringing and grip.

Thanks for reading! The price varies between stores, but it'll probably set you back about UD$150 with stringing and grip.

hi arthur, have u got a chance to try the Bekia MX80 replica? I am tempted to either Bekia's MX80 or Twister x8.....after reading your reviews. I just bought a bekia bravesword 10 replica......I like it after 1 session (2 hour).......Bekia has quality and value for money. Looking forward to your comment.

Looks like you paid that store in Sembawang a visit :)

Glad you liked the Bravesword 10 Replica. It's a fantastic racket and I've given it a very good rating.

I'm not had the chance to try it extensively, but I had a go with the MX80 replica for a doubles game and it's behaved quite strangely for me.

It maybe because the strings were at 26lbs when I'm used to 24-25lbs, but I'm not able to get a good judge of distance.

The friend whom the racket belongs to says it's fast to move, and good to hit, but the sweet spot's rather small and you'll get less-than-satisfactory shots when you're not hitting the sweet spot.

If you do spring for an MX80 replica, do let me know how it feels!

Where did you get your racket from? Kind of hard finding shops that sells victor rackets in Singapore.

Hi, I got mine off my stringer. It's second-hand but in pristine condition (even for my standards!).

True, there's not a lot of stores that carry Victor rackets in Singapore.

You can try your luck at E-Link in AMK, or the official distributor at Sims Avenue. I'm not too sure about the exact addresses, so you'll need to do some research.

All this talk about the MX80 makes me want to re-buy a new one to give it a shot :)

Oh it does , thanks much!

Oh it does , thanks much!