Before all my expensive Yonex rackets were the value-for-money series - Karakal, Carltons, Dunlop, and Prince. These were the underrated rackets that little wanted to try because there was the perceived excellence that is Yonex, Li Ning and Victor.

We know how much I adore Carlton rackets (even more so with the recent purchase of a Powerblade 9902), but I've had the pleasure of using 2 Prince rackets so far, and I've only had good things to say about them.

This one here's for the very pretty Black Pearl. The racket first caught my eye when I was choosing between this and the Black OS - it was nice and shiny (always good to attract attention), but it also was a conventional head shape. I've never had one of these so I got curious.

Let me first state that I am no pro, and this is just my evaluation of the racket to my playing style and experience with it. If anything, I'm a low-intermediate level player looking to improve myself by playing more often and taking the lessons that I learn from the court away as pointers for the next session.

With that said, on to the review.

I've only used this racket for singles play.

Defense
Coming with an oversize head means the swings come slower, but this racket isn't very much heavier than the rest anyway so the bigger head comes into play. Defensive shots are clear and precise, with the shuttle reacting the way I want it to. Reaction to drives comes easy with the even-balanced weight and larger sweet spot.

However, having larger head also means that you're left with less shaft. That took my defense down a notch when I reach for smashes down the side tramlines.

I've also recently been host to a lot of body smashes. With the Black Pearl it's less of a problem because of  the speed at which I can move the racket and the larger hitting area given by the overhead head. The specifications of the Prince Black Pearl XP makes it a pretty all-rounder in defense - speed from the conventional head and even-balance counters the drag by the oversize.

Attack
The "XP" in the name means "Extra Power", or I'm told. Being an even-balanced racket, I wasn't able to pull off much power from the racket, but what I did notice is the quickness from the sudden snap of the wrist and how that translate to a very fast reply.

My smashes sounded sharp and crisp, landing mostly where I intended them to. Although I found myself using more check smashes with the wrists than the full-on court busters, the feeling of how quick the shuttle came off the strings were addictive.

However, the XP branding really came through when it came to the cross court pushes and fast drives. Not a fan of using those often, I found it amazing how accurate the Black Pearl can be.

Control
This is one to talk about. The Prince Black Pearl XP gives me a lot of confidence when it comes to moving the opponent around the court. Drop shots, net play, drives, pushes, clears and deception came easy with the Black Pearl in my hand, and I'm glad for it.

Although the even-balance of the racket means I'll have to work a bit harder to deliver the distance on the clears, the ease at which that task comes makes the disadvantage negligible.

Perhaps owning to the bigger hitting surface, net shots and drop shots (both of which require you to hit off-centre from the sweet spot) are relatively easier to perform.

Looks
Chrome and gold. Stunning. You can now call me, Gold Finger.

Comparison
I've only had a few other even-balanced rackets, and I'm going to to compare this to the Carlton Vapour Trail Vanquish. With the Carlton among my top-favored rackets, the Black Pearl comes pretty close in the control department. Well suited for players like me who like to win the game by having the opponent out-maneuvered, the Prince Black Pearl XP comes in slightly behind the Carlton Vapour Trail Vanquish in terms of control and speed. 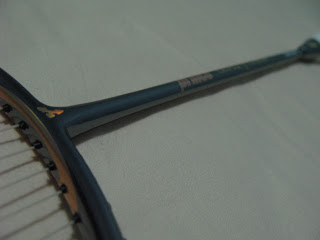 Hallo mate,
I found your blog while I was looking for a review of this racket. I managed to find one sitting as the last new-old-stock in the shop nearby, and your review did encourage me to pull the trigger and I'm glad I did. And yeah, after having Yonex BG66 Force @ 26 lbs, this racket moves like a wizard. The control is impressive and the power is great. The paint job is blazing and totally cool. I wonder if Prince had any model that got quality like this one. I think this Prince is great its quality is amazing for its price. Thanks for your review, mate.

Congratulations on the excellent purchase. I've used a few of the new rackets by Prince, and sad to say the Black Pearl remains the one I'd recommend.


Devin, indeed I'm enjoy reading your pretty well reviewed on Black Pearl Prince racket. Am planning to get one soon. Before I hooked up into Prince, I've tried several rackets cost around RM150-300 or so but every time giving hard smash, my arm tend to get pain.

Later a friend of mine ask me borrow his Prince Triple Threat, surprisingly no more pain. No joke!

Since then I only use Triple Threat. Owned two of them till today. Sorry I don't bother to remember which model but the flashing look on paint job and the feeling when handling it...really cool.

Hi there Frankie, I'm glad to know you've found Prince as good ones. Actually I'm looking for Prince rackets too, but they don't seem to be around anymore. I'm excited to hear from you and Arthur again soon.

Given the bad climate of racket sales, Prince halted their production facility in Taiwan (as far as I know). The rackets that you see now (if you see one) are probably old stocks.

Am afraid to say the future of smaller racket brands are bleak.

Hi Arthur,
How have you been doing? How's your recovery progress?
I recently found some new released Prince Phoenix 1200 Pro and the 1500 Pro. I did try some swings and they seem to be solid. I am curious to get them soon, what do you have in mind about these series, mate?

Hey Devin, going well.. I'm back on stroking on outdoor courts for the moment but am really taking things slowly.

If they're new rackets, I would have no idea how they feel. I'll have to recover fully before I can get back into testing and reviewing rackets again.

On another note, if the rackets are made in Taiwan instead of China, like the black pearl series I reviewed, they're typically ok. I've not tried China-made rackets for awhile, but I've been told their quality has been on the up and up.