I've had difficulty using this racket at first. It was really stiff and heavy so I couldn't get any speed on it. It's also got the honor of being the first racket I've dropped onto to the floor. I was blocking a smash and off it came!

A few months and a little bit of skill upgrade later, I'm able to confidently handle the beast. And I must say it's become quite the weapon. Coming off a Karakal PU Super Grip, I've changed to using only an overgrip (one with ridges for some comfort). Having the thinner grip gave it even more power!

With the two sessions firmly in my memory, I decided to write a review for the second of the World Beating Performance rackets that I own.

This review is from my opinions of the racket and the game of badminton,. Take this with a pinch of salt. If you've got questions on this racket, feel free to ask.

I've used this racket only for singles play.

Defense
This racket is heavy, and you can really feel it when you have to concentrate on defending them smashes! I found myself hitting the frame on defense, to me a clear sign of not being able to move the racket head fast enough to intercept the flight of the shuttle.

What's even more drastic is the switching of defense from left to right. You're going to have to depend on your instinct for this one. The weight of the Armortec 900 can really slow reaction down a bit.

However, it's the same weight that gives your returns the solid push and feel that's required to turn defense into offense. Be it a soft block to the front or a hard drive the opposite direction of the court, the Armortec 900 Power delivers.

Attack
While we're on the topic of delivering, I might as well get to the point here.

The racket's got a "Power" to its name. That's got to stand for something. The stiffness of the racket, coupled with the heaviness of its frame, brings a very satisfying attack to your game.

Pushes to the sides of the court were sharp and flat, smashes down were powerful. What you might want to be careful for is a well-placed return. The weight of the Armortec 900 Power leaves you less time for recovery after a hard attack.

Control
I like it when a racket allows me more time to think about where to place the shot than worry about using enough strength to deliver the shot where I want it to. Low-effort rackets like this one makes a game so much more enjoyable.

The Yonex Armortec 900 Power LC offers the ease of power, leaving you in command of the flight of the shuttle. I wasn't in any situation where I found myself having to place thought into putting more power to deliver to the far side, and that is worth a mention.

Looks
This racket's modeled after a fearsome tiger, with stripes coming off the t-joint blending in with the powerful black and yellow head. At the two and ten o'clock positions of the head are the bright blue eyes of the predator, ready to pounce at a loose shuttle. The look's topped off by the white streams atop the racket allowing the word "Power" to be clearly visible. 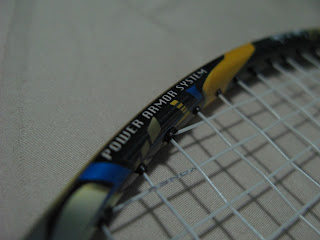 Sorry dude, but I don't understand the language.

Can you say it in English please?

I just happened to understand the language... :)

But unfortunately, I can't help much with this one as I've not had the change to try the AT900T.

Only ever held it once, and it felt slightly lighter and swung faster than its Power counterpart.

Armortec !! What a sucking name??

A rose by any other name would smash as hard :)

hi.. i own yonex carbonex 6 n apacs furious 335.. i love my yonex cause i play more offensive style.with it weight, it easy to get a point with a smash.returning the shuttle also did't need more power.my apacs is too light for me. during defense,it easy to control but hard to deliver the power.need more power during attacking.. i plan to replace it either Yonex Armortec 900 Power Lee Chong Wei or Yonex ArcSaber 10 Peter Gade.can you give me suggestion.. tq

If you don't mind being a little slower on defense, the AT900P offers better power than the AS10 in my experience.