My stringer told me that there are little takers for the Nanoray, Yonex's newest series of head-light rackets. This week he sold 20 Voltric Z-Force rackets over the weekend.

Seems like the work's got a thing for power, and most of the time they gravitate towards the heavy-heavy Goliath series, the Voltric.

Understandably, I've also put my faith in head-heavy rackets. The Carlton S-Lite has been sitting on my wall for the longest time, relegated to the doubles lineup because I though that head-light rackets just couldn't cut it when you want a good singles game.

That opinion changed drastically when I decided to take the S-Lite for a test run this Saturday.

This review is from my opinions of the racket and of the game of badminton. Take this with a pinch of salt. Feel free to ask me if you've got questions on this racket.

ok, now on to the review.

I use this racket for both singles and double play.

Defense
Head light rackets are good at defense! Taking hits became a joy and returning them a pleasure as you move the head swiftly to counter or block. The weight of the 3U Vapour Trail S-Lite allows you to pump the shuttle to the far corner a lot easier than with a 4U racket.

The racket also has what Carlton calls an Optimetric head shape, which is a cross between an isometric and an oval head shape. This allows for a faster swing to get to them faster shots.

Attack
Here's where it gets interesting. I used to think that head-light rackets won't offer as much power as their head-heavy counterparts. Boy was I wrong.

The Carlton Vapour Trail S-Lite offered me one of the fastest smash speeds among my racket. The shuttle left the string bed with a very satisfying explosion every time. Drives made with the S-Lite were even more satisfying, allowing a lot of innovation with the wrist shots.

One thing I noticed is that with a head-light racket, you hardly get a forced follow-through after the wrist smash. The racket stops where you left it without the weight of the head pulling it forward and the shuttle a little downwards.

The Carlton Vapour Trail S-Lite adds a new variety into my attacking arsenal, and I welcome the upgrade.

Control
Using a head-light racket means I can't get the shuttle to as far back to the court as I like without using a little more arm. That translates into wild shots at time, and I've had to adjust my game a little to make sure that I put a little more effort to place the shuttle better.

Netshots also took a slight beating as there's no weight in the head to add that little more push to get those hard shots over. Once more, there's the need to consciously keep in mind that I place the shuttle better, which may even be a good thing.

It took awhile to get used to, but the shot accuracy increased eventually and the game just got more and more enjoyable.

Looks
The Vapour Trail series of 2010 all pretty much come from the same design mold, with a color change inbetween the models so you can tell them apart.

The S-Lite is no different, illustrated in orange swerves and cuts. It's a refreshing color, definitely worth showing off. 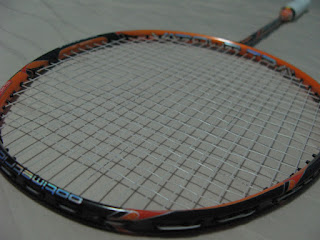 Hi how would you compare this racket with vapour trail vanquish? I saw your both reviews and it looks this is more powerfull? thanks

Hello! The Carlton Vapour Trail S-Lite feels more powerful because it's a 3U racket, so more weight gets transferred into your swings.

The Vanquish triumphs in terms of control and speed for me though. The short handle on the Vanquish also makes it more dexterous and wrist-friendly.

Thanks for answer!:) Just one more question because I'm just before making of choice between vanquish and s-lite. Is it much more effort to punch clears with vanquish than with s-lite? Or just sligthly? I already use yehlex flashpoint (similar with z-slash) and I have to say I'm suprised with overall performance of this racket: fast, clears easy to execute, and powerfull smashes and my wrist have a rest... so I'm looking for something similar. Thanks

I'm ok with both rackets, but I've found that the Vanquish delivers the clears at a better rate, with me not griping about how it's not far enough.

Strings and tension also play a part in punching clears. I'm on Yonex BG66 at 24lbs for both. A higher tension on a light racket will mean more effort on your part to get a good distance on your clears.

But seeing how you're accustomed to the weight distribution of the z-slash racket, I'd say the Vanquish is a closer fit as it's an even-balanced racket.

Let me know which you chose and how it works out for ya!!

I really enjoyed reading your article. I found this as an informative and interesting post, so i think it is very useful and knowledgeable. I would like to thank you for the effort you have made in writing this article.