I had a very good experience with this racket in tonight's session and decided to hasten the review before I forget what it felt like.

First impressions of the racket were pleasant, but there was much in store for me when it came to the Toalson racket. Made of the same grade Japanese graphite that runs along the shafts of Yonex rackets, Toalson rackets are well-made and offer a good game for your dollars.

This is also my first woven graphite racket, and it left me wanting for more.

This review stems from my opinions of the racket and of the game of badminton. Take this with a pinch of salt, but feel free to ask me if you have any questions that my review failed to answer.

I use this racket for singles play, but am sooo looking forward to taking this to my doubles games.

Defense
This racket is amazing when it comes to twisting and turning to get the shuttle back across the net. The even weight distribution and the overall light weight of the Camblade Rev 3 allows for very quick reactions. Moving the racket head up to take the loose shots are no problem, as is taking the shuttle early from the smash to direct a nice drive to the other side of the court.

Clearing from end to end wasn't that much of a problem, as I would have expected from a 4U even-balanced racket. The clears were rather effortless and accurate. I have two things to credit for this - at the four corners of the racket head (2, 5, 7, and 10), there are slight protrusions ala the Tri-Voltage from Yonex's esteemed Voltric series of rackets. Toalson calls this the Camblade Design, and they released the racket first.

These, along with the increased stiffness from the woven graphite, gives the racket a bit more power without sacrificing on the swing speed. It's a marvel of engineer, really, and I appreciate with every swing I take.

If you're a player who likes to take the double motion shots, this trait of the Toalson Camblade Rev 3 will prove to be helpful since you compromise less on power when you want to take the shuttles late.

Attack
Perhaps the most surprising thing about this 4U racket is how it's so powerful! I had with me the Yonex Voltric 60 on the same evening and I found myself craving the power of the Camblade Rev 3 over the head-heavy Voltric.

Light weight equates to a faster swing speed. Woven graphite gives you more power with stiffness. Two factors again combine to give you one heck of a smash.

I found recovery after a smash rather quick too, what with the light weight 4U racket coming into play. You'll be able to take a good follow-through for your smashes and then recover quickly enough to tackle whatever the opponent throws at you.

Being a 4U racket, I couldn't resist taking a few wrist smashes with it. The result was also amazing. The shuttle leaves the string bed so quickly, and it allows me to catch the opponent off guard so that I can follow in with a harder smash.

Harder smashes are great with this racket as well. I've been trying out a revised smashing technique that uses  more pronation of the wrist instead of the arm, and it's coming together really well with the Toalson Camblade Rev 3.

It's one of those powerful smashes Asian players have grown to love, but it's quick as hell, and that's the way I like my smashes.

Control
I've always had good control with my 4U rackets, and this one is no different. Perhaps the only thing I can gripe about is how I can't seem to get a good height off receiving a smash. With the lighter weight I guess it's hard to gather enough force to counter a strong downward smash.

Other than the above, shots are pretty well placed. I dare say this racket almost makes me feel as good as my Yonex ArcSaber 10.

One thing I have to note though - backhands with this racket lack power. I'd advise against using the Camblade for backhands. I've had a few hit half court this evening already, and the backhand smashes only come back to haunt me.

Looks
If you're read my reviews before you'll know that I place a lot of emphasis on how a racket looks. I've never bought a racket that looks ordinary, and how a racket looks with its stings and grip is usually the first consideration that I give when buying.

The Toalson Camblade Rev 3 comes in a deep, serious grey, woven graphite patterns running all along the frame of the racket, ending with the handle. Complementing the dark grey is a noble blue, streaking down the interior of the head Camblade Design and peaking again down the faces of the shaft and cone.

The grey and blue combination is enhanced with gold text and silver accents down the shaft, ending with a nice gold Toalson logo at the cone. Turquoise strings and a white replacement grip complete the look. 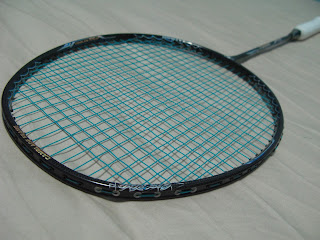