This is a long time coming. I've not had the chance to use the racket well enough to write this review, but after tonight's game I've got a little more insight into what the racket can offer.

The Carlton Powerblade 9902 belongs to the same series of rackets as my Fireblade FX8 and recently acquired Ariblade 35. I've always had a fondness for Carlton rackets; they bring with them a high level of quality at a competitive price (if you're able to find any of the 2010 and below series).

I first gave this racket a pass because its color didn't strike me as unique (for you all should know by now that to me, looks is as important as the ability of the racket). I had the chance to see it with gold strings a few months on, and the I had the luck to procure the last one from my usual string. He found it in one of his put-aside racket bags.

A few months down and I've seldom had the urge to use the racket. That was until I decided that the design wasn't enough for me to keep it and posted it up on the forums and eBay.

As per custom, I'll give the racket its last few games to redeem itself before it goes to another more worthy owner. And boy did the Powerblade 9902 prove itself!

This review's my opinion of the racket from using it in my games, my style. No one plays badminton the same way, so take this with a pinch of salt. I'm here to tell you, in as much accuracy as I can, how my games went with the racket. Comments welcome!

I use this racket for singles play.

Defense
Head-heavy rackets have always been a disadvantage to me when it comes to placing a good block, but there are the few exceptional ones who make it feel so easy. The Carlton Powerblade 9902 is one of them.

Perhaps the added flexibility from the golf-technology shaft gives it the little increase in defense ability, but I could sure as hell feel it as I block smashes and turn the shuttle to various corners of the court.

I'm also thinking that the Powerblade 9902 isn't as head-heavy as its counterparts, since I could wield it pretty well and easily without much sacrifice in speed. From drive defense to the block to the net, the 9902 performs admirably.

Overall speed does suffer a little, but I could only feel it slightly.

Attack
I remember hearing a short review from a guy who brought the racket in for restringing, "This racket is darn good to smash with."

And he's right! The golf shaft comes into play once again, lending additional power into the swing, translating into the shuttle and down onto the courts. I'm not a heavy smasher, but the Carlton Powerblade 9902 offers a powerful smash without the need for too much elbow grease.

Drives might take a fall back as the head-heavy orientation of the racket tends to pull the shuttle down more than you might want to, but once you get used to it, the racket serves up a powerful offense when needed.

Once thing I did notice that's a bit hard to perform is the check smash with the wrist. I'm traditionally had difficulty with this shot when I carry head-heavys, and the 9902 is no different. I've also come to realize that these kind of shots are well-performed with stiff rackets, and the shaft technology plays to its disadvantage this time. Users of the wrists beware.

Control
Carlton have outdone themselves once more with the Powerblade 9902. Within the head-heavy frame lies the ease of control that I usually see with 3U even-balanced rackets like the Yonex ArcSaber 10 or the Victor Bravesword 15.

Shots to the backlines are effortless, and the backhands feel so easy to perform. The extra weight in the front of the racket helps quite a bit when it comes to going the distance and dragging on rallies.

I mentioned that the head wasn't as head-heavy as the rest of its kind, and this translates to a better control at the net. Slight touches are no problem with the 9902, as are the spinning net shots (though I don't remember doing much of those) and the cross-court net drops.

Looks
This is where the Carlton Powerblade 9902 loses out. Coming in a dull grey tone, the racket oozes subtlety with slight silver accents and a hint of gold running along parts of the head frame and shaft. The pseudo-chromatic finishing gives it the little bit of boldness.

The gold strings complete the industrial look. This racket is made to look like it's a hard worker, and the steel grey tells it all. They might as well have added rust along the sides. 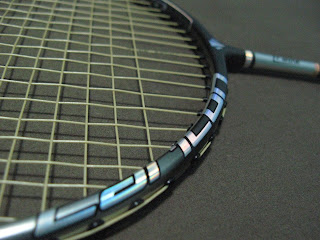