I seldom have second thoughts when buying a new brand racket just so I can try out the quality and technology that the maker promises.

The Gosen brand has been elusive to me for the longest time, what with my not wanting to spend top dollars for their high-end rackets like the Tenbu or Shinden. So when the Aermet came along, it was a kind of blessing to be able to give the brand a try without busting the bank.

It came nice and red (I have the most red-orientated rackets), and with the standard Gosen technology like the two kick-point system and the broad t-joint stabilizer.

So how does the Gosen Aermet 2100 Limited Edition rate?

This review's my opinion of the racket from using it in my games, my style. There are a lot of ways to play badminton, so take this with a pinch of salt. I'm here to tell you, in as much accuracy as I can, how my games went with the racket. Comments welcome!

Defense
This racket performs poorly at defense compared to the other head-heavy rackets that I have. Somehow, the speed of the swings take a back seat and despite having a wider head frame to hit with.

I've had a positive experience with the Bekia Twister X8, another head heavy racket with an oversize head frame, but it seems that it's a unique case.

With the Gosen Aermet 2100 Limited Edition, my defense took a back seat and I'm left blocking the hard hits into the net most of the time. There's little control to my blocks and drops, and it makes my usually defensive style of play suffer.

Attack
For a head-heavy racket it was pretty tough to get some power from it. Despite having very good qualities for a hard smashing racket - wide sweet spot, head-heavy bias, high kick-point and stiff t-joint - I was disappointed by the quality of my offense.

One saving grace - the racket manages to deliver a rather sharp angle, perhaps owning to the high kick-point and flexibility. Wrist players may have better luck with this one.

Control
I like to think of myself as a control-type player. And so I've always left this attribute for the last when I write reviews. There are many things that go into the control elements of a racket, and I test them out mainly by hitting the shuttle around to see if I can get ease of movement while maximizing the opponent's distance moved; the more he moves in relation to mine, the better the control of the racket.

The Gosen Aermet 2100 Limited Edition fails rather miserably in this aspect. I find myself chasing shuttles if any, and my replies have to be rather instinctive, hurling the racket head with all the power my wrist can generate from a late return into the most expected area of the court.

Not a good thing if you want to control the game.

Looks
Red and black and white organized in a stately fashion creates the authoritative profile sorely lacking in the playability of the Gosen Aermet 2100 Limited Edition. 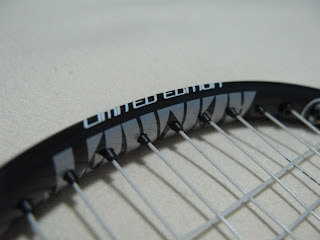