My stringer first interested me in the Karakal brand of rackets when I was starting to get into the hang of the game. My strokes were just beginning to pick up and I was open to trying new rackets to improve the game.

At that moment, I found that generally performed better with even-balanced and lighter rackets. That's when the SL-70, with its branding of "the lightest racket in the world" came to be attractive.

Weighing in at 70g, the SL-70 offers a head-heavy orientation, which grants you a slightly offensive vantage when approaching the shuttle. A light-weight but even-balanced racket will not have worked.

I got myself a M-Tec 70, the isometric head shape version of the SL-70, and it didn't perform well. When the chance for me to get one of these, the temptation kicked in and I sprung for it.

Not a bad choice, I must say. With more experience and technique from training and playing more often, I'm now able to give the racket more bang for its buck.

This review is my opinion of the racket from using it in my games, my style. There are a lot of ways to play badminton, so take this with a pinch of salt. I'm here to tell you, in as much accuracy as I can, how my games went with the racket. Comments welcome!

Defense
This thing is fast. Faster than any of my other rackets I must say. The smaller head frame from its conventional oval head frame gives it a faster swing and quicker reaction times. Quicker speed means I can play around with my returns and generate a lot more threat from the blocks.

However, the lack of weight shows when you're trying to perform a high block to the back of the court. Drives and drops come off plenty fine, but once I tried to give it a bit more elbow grease, the shuttle doesn't get enough distance and there's always the threat of a return smash.

My buddy commented today that I get a lot more court coverage with the racket, which I think adds to the overall defense of the racket. Being so light, there was very little to drag around.

How does the weight affect one's footwork? There's a little exercise you all can play around with to give yourself better control and reaction - take a shuttle and juggle it as fast as you can with different rackets. You'll notice a lot of difference in speed and control when you're dealing with head- light or generally lighter rackets.

Attack
The BG66 Ultimax is a smashing string offering a high repulsion to get the shuttle leaving the string bed fast.

The Karakal SL-70's very quick swing speed adds to this repulsion and is capable of producing a very fast attack. Being quick on the draw also allows me to set up a smash with a quick series of fast rallies near the net.

Adding to the comment about court coverage, the buddy also told me that with the SL-70, there was a little more guess work when he's needing to see where my shuttles was going. It seems that the fast swing speed also comes with a related faster stop speed.

Change of pace with the racket is superb, offering a new pace at your whim.

Contol
Here's where the racket falls a little short. Granted the shape of the head frame plays a part, but it's also up to the player to get used to the significantly smaller size of the sweet spot.

There's also the issue of not having enough weight at the front of the racket to reduce the effort needed to place shuttles to the back court. I have to thank the speed of the racket because of all the smashes I'm expecting to come back at me.

Control at the net was also a little lacking, with the tight net shots traveling a bit far from the tape for my liking. Again, I attribute this to the lack of weight to the racket that allows kinetic energy to do the work for me.

Looks
Karakal is known to produce rackets with different design, so I was pretty glad that my SL-70 comes with an elegant red-white combination. 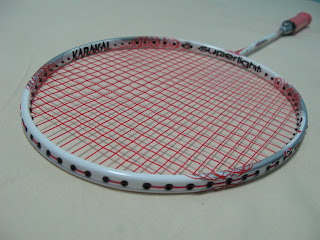