I love the Mizuno brand. I've filled my closets with their shirts and bags, and for the longest time, I've looked at their rackets on the websites wishing that I could get my hands on one of them. Unfortunately, there's no distributor in Singapore for the brand's rackets, and they've been elusive.

Until one day I chanced upon someone on the Badminton Central Forums wanting to let go of a mint condition Tetracross 700. I jumped, and here it is with me ever since.

My first Mizuno! But it didn't impress when I took it to the court eagerly for a test run - the clears were weak and the weight wasn't as suited for my play as my expectations.

But time went on and I changed to using the racket for my doubles games. It's been performing well so far, and I've got a review for you guys.

This review is my opinion of the racket from using it in my games, my style. There are a lot of ways to play badminton, so take this review with a pinch of salt. I'm here to tell you, in as much accuracy as I can, how my games went with the racket. Comments welcome!

I use this racket for doubles play.

Defense
The Mizuno Tetracross 700 is blazing fast. The isometric head shape is very slight, and that lends quite a bit to the aerodynamics of the racket. Being a head light racket also helped it achieve a very good speed on the swings. Smashes hardly trouble me with this in my hand, and the time it gives me as a result allows me to control the return pretty well.

Something that I noticed about the Tetracross 700 was how I could drive a shuttle low with speed to the other end of the back court from a smash. A flick of the wrist and it's gone to the other side, sometimes before the attacker can land or move proper.

However, high blocks are a problem. Given the lack of power from the racket, the underarm lifts from smashes too a little beating, often not strong enough to get to the back court.

But despite that I've noticed that I don't get attacked a whole lot when I'm equipped with the TC700. And if I ever were, I'm pretty confident that I can give a good defensive fight.

Attack
I received a comment on the blog that this is a wrist racket, and that the smashes from the Mizuno Tetracross700 would be amazing for someone who's able to harness the use of the wrist.

It didn't take long for me to find out how good this racket was to smash. The sound of the shuttle came off sharp and resolute, a reflection of its path to the other side of the court.

There's a loud smash, and then the shuttle is controlled to the other end, into the tightest opening. Though the largest problem for the racket so far is its inability to clear too far, the attacking prowess of the racket somewhat makes up for it.

Control
Of the three types of rackets that I have I think head light ones give me the most problem when it comes to controlling the shuttle. The Mizuno Tetracross 700 performs quite well in this aspect, allowing me to place the shuttle rather accurately and with speed, but only if it's an offensive downward stroke.

The racket seems to have a problem generating power when you're trying to clear or lift. As mentioned earlier, you'll really need your wrist to make the long clear happen.

And one thing happens when you've concentrating too much on getting the distance on the shuttle - you lose control. Having to use more than usual strength to get the longer shots will mean you can't place it as well.

This showed when a larger than usual portion of my clears failed to get beyond the first service line.

Net control is great, with the light head of the racket allowing you more flexibility and agility to pull off the trick shots.

Not too shabby, but the long clears really lost quite a bit of appeal for me.

Looks
I don't like green, especially when I know that there's an other shade of blue to the Mizuno Tetracross 700. It's not pretty, but I won't go as far as to call it hideous. 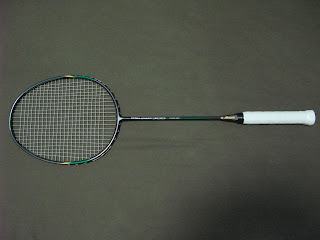 Using the TC700, you have issue with clears and power generating ? Take the TC300.

This is what I'm using with the greatest pleasure !
It does the job in all areas.

I would if I knew where I could get my hands on them in Singapore. :)

The only place I know you may buy them actually is HK with Mr Chan: