This brand brings back memories. It's the first brand of rackets I've ever owned, and it's been with me through my little boy school team days.

The stringer brought in a few models and only this one caught my eye. It's green, so that's quite a surprise. The Pro-Kennex Nano X2 9000 is the top tier of the range available at the stringer, and at first handling you can see why.

The spiral graphite adds to the stiffness of the racket, and it gives off a rather good feel when you hit it, especially when you're playing doubles and like to stand at the net like I do.

However, preliminary playing with the X2 9000 wasn't as satisfactory since the light weight of the racket makes it difficult to clear with.

I've taken more swings with the racket, enough to write a review.

I recommend this racket for doubles play.

Defense
I wrote in the First Impressions that the racket was fast in defense because of the 4U weight. However that was also the reason why it couldn't clear far. I hated not being able to clear far, so I added the lead tape to give it a little push at the back of the court.

However, this extra weight at the top of the racket was all it too to slow down the defensive swings considerably. The Pro-Kennex Nano X2 900 potentially can shug off attacks and have your oppoennts scrambling around trying to chase their own smashes, but for the duration of my matches with the lead-taped head, it's just at little bit slower, and I couldn't generate enough swing to punch it very far either.

Taking into account the slower speed to raise the racket above my head, the drive defenses also took a beating. Not that it wasn't fast, but I do remember the X2 9000 being a whole lot faster.

Attack
If the defense goes down because of the weight of the head, the attack will of course be directly be affected by it. The Pro-Kennex X2 9000 is able to delivery quality smashes down your enemy line.

Although equipped with power wedges at the 2 and 10 o'clock positions, the lead weight did much to help those two along the way. Think of the power wedge as the same as Yonex Voltric's Tri-Voltage weight system.

But the Pro-Kennex Nano X2 9000 really shines when it's at the front of the net, intercepting and getting them check and wrist smashes in. A simple turn of the wrist and the shuttle's on the floor before you know it.

Drive attacks seem to have taken a back seat though, which is a very strange thing for a light weight racket to have. I wasn't able to generate as much threat from my drives. I'd rather smash and drop with this

Control
Speaking of drops, the stiffness of the spiral graphite used to make the shaft adds plenty to control at the front court, if only the lousy shaped racket head didn't get in the way all the time.

Somehow I wasn't able to get as much agility and accuracy from this racket as I would let. the pushes were off to the side, the clears a little too far and the clears just aren't hitting the right spot.

That said, it was rather difficult to get into the game when half the time you're cursing the shuttle for hitting your frame so much. This applies to both the smashes, clears and especially net drops.

Looks
Green and black makes a pretty good combination, with the black spiral shaft coiling its way up the sculpture and melting the gloss covering to a matt finishing on the racket. Pro-Kennex showed a nice sense of design with this one. 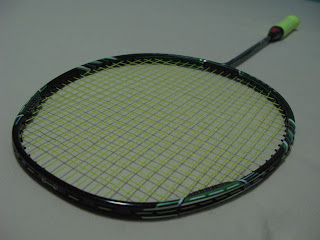 There is a flexi shaft model of this.
Can you get the flex shaft model to see if it is better?

What would you rate the racket out of ten over all.

where to buy the bekia racket?
Is there any webpage?

If it's still in stock, you can try your luck at Arctric Pacific, 9 Sembong Road, opposite Sembawang Shopping Centre.

No website, sorry! It's a private house the owner works out of.