I had the chance to try out these awesome strings from Pro-Kennex, and I have to say they've been pretty good for my games so far.

One thing that I've noticed is that my smash speed and force increased. The three strings have very a very good hold, in that they take in the shuttle and stretch the string bed before repulsing the shuttle.

If you, like me, are one of those who like to feel the shuttle being absorbed into the strings before the hit, you'll surely like the three Pro-Kennex strings.

I'll start with two I've found less liking to (no less good to play with) before I move on to the one I like best. 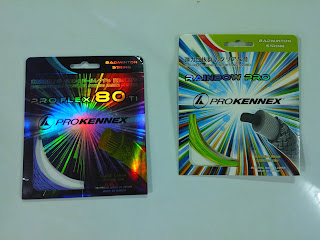 The Rainbow Pro strings are your staples. 0.66mm with really response and feel. I've been told they fray quite easily though. After a few sessions I could notice the strings in the off-centre zone fray. True to its name, it comes in duo-tone and a rainbow option for those who opt for a little color in their game.

The Pro Flex 80 Ti feels exactly like the Rainbow, but it comes in at 0.68mm. This potentially gives you more power on your hits since more of the string is there to hold and repel the shuttle. Since I normally play with thicker strings (Yonex Nanogy 99), this felt more at ease than the Rainbow Pro.

Until this came along. 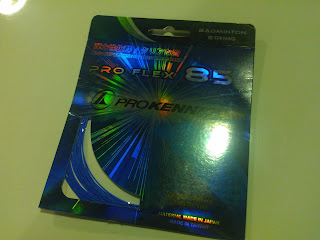 I like the Nanogy 99 because of the bite it offers to the shuttle. You feel like you can throw the shuttle off in any direction because the grooves on the strings catch onto the shuttle for that little much more.

The Pro-Kennex Pro Flex 85 offers the same sensation, but at a better feel than the typically harder Yonex Nanogy 99. The Pro Flex 85 gives me more control since I don't have to use much energy to place shots because of the strong holding capabilities of the string.

Coming in at 0.68mm as well, this string is the perfect replacement for my Yonex, not only because it's cheaper but more importantly because it adds more to my game.

Being good at holding the shuttle means I can string at higher tensions. I've moved my regular tension up to 27lbs, and that has given me stronger smashes alongside with the easier clears.

All-in-all, the Pro-Kennex series of strings offer me a greater feel, but at the cost of shorter string life. I don't expect them to last as long as the Yonex ones do, but it sure as heck gives me a more fun game.
Posted by Arthur at 00:35