Those looking for an ArcSaber 11 review or an ArcSaber FB review may have to wait for awhile. The two rackets, though very popular on my search ranking, have yet to appeal to me. (Although I have to state officially that the ArcSaber 11 with the yellow strings are awesome).

I will take this chance to revisit an old racket of mine that I've not been able to use. I took it out to court this morning and felt that it was about time to write a review for this gem.

The Li-Ning Flame N36 was my first Li-Ning racket. Prior to this, I have had a lousy impression of the brand. To me it was lacking in research and all it did was throw together some graphite into a mound.

This racket changed everything.

I recommend this racket for shot accuracy and control.

Defense
Being even-balanced basically means that the N36 is fast to swing, and offers a little more power than head-light rackets. I had little difficulty blocking smashes with this racket, and with a little proper footwork I do see myself directing the shots into empty areas of the court.

Lifts to the back court might take a little beating though, since the weight of the Flame N36 is a on the lower end of the 3U scale. I found myself missing the back lines a couple of times, but at least the speed of the racket in defense gives me a better bet when the shuttle comes flying down.

Drive defense is great. I could turn the shuttle downward and with good speed, thanks to the lack of gravitational forces pulling down the head of the racket.

Attack
Here's where the Li-Ning Flame N36 lacks. I was able to get a good angle on my smashes, but the speed and power were sorely lacking. There just isn't enough weight to get a good punch in.

I would recommend using drives as your main point clincher, since the racket excels at the flat exchanges. I was able to get a very good pace on the drives, much better than how I performed on the smashes.

If you're a fan of drop shots, then this racket might just make your to-buy list. Thanks to the very good control rating, the Li-Ning N36 allows you to perform almost any sort of drop shots you want.

Control
If there was any racket that could practically hit any corner of the court, this would be it. I felt very at ease with the N36, and the shots that I performed showed it.

The best plays were when I was casually throwing the shuttle around, picking and dropping the pace when I wanted to. There was no fear of losing control of the shuttle because it became so easy to place. From forehand clears to backhand drops, there was no shot that felt out of control.

This quality supplements the lack of punch in its power play, allowing you to win points through superb placement and by simply out pacing your opponent.

Looks
Gold and red go very well in the Li-Ning Flame N36. The oriental motifs around the head frame give it a very asian feel, and is seldom seen in rackets these days. The usual sleek lines and illustrations are replaced with tasteful curves and shimmer. 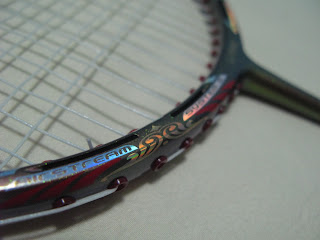 So after reading this, and seeing similar specs on the Li Ning Woods N90ii with just more punch, here's my question: Is Li Ning Flame N36 just another version of the N90ii or is it a whole new individual racket on its own with its own unique properties?

And, since you think that the Woods N90ii is rathers tiff, why not try the S-Type version of it :).

The S-Series seems to be a more control and speed-oriented series compared to its stiffer Woods N90/-ii counterparts. I tried it once but its not much for me though...rather lacking in power...

Anyway, what do you think?

Hope to hear from you soon! XD
Hugo

The N36 will offer you a faster game play since it's lighter and even-balanced. Two different rackets I would say.

If you were to change to a speed game, I'd seriously consider the N36. It's a lot faster than the N90/II.

Thanks for your quick reply Arthur

Once more, I would like to highlight on the fact: have you tried the S-Type racket?

And regarding the issue on the speed of the N36, I'm sure its faster because of the air-streaming frame, but doesn't the N90ii come a close second since its also flexible?

I had once swund the racket a few times, strung with ashaway zymax 62, a 62 mm string strung at 27lsbs.

It was very stiff, so when I hit it, the power wasn't very lacking to me though.

Anyway that's just my personal opinion. How about the S-Type? have you tried it before?

Nope I've not tried the S-Type. I heard it's lighter than the N90-II though I can't confirm it.

The N36 would naturally be faster for me since it's an even-balanced racket. Guess I just function that way :)

The N36 would offer more control and speed, but the N5-II gives you more power.

That was a nice review.
I'm newbie at badminton. Do you think how can I get best performance of this racket? What kind of string and the strength should be ?

Thanks. Depends on how much of a newbie you are. This racket is on the heavy and stiff side so it'll take a little getting used to.