It's been awhile since I had a review out, and I've been trying quite a few of the rackets that got left behind. There was this one particular one that I've been wanting to buy, but didn't get enough conviction of acquire... until the store gave me a good discount :)

It's got a bad design, but I managed to convince myself that it bears the colors of Captain America (and so it got its nickname) and that gave me some peace in terms of its looks.

It's got a few technologies that I like - the sharp head frame that's characteristic of the Victor Bravesword series, and the tapered inner core from the Yonex Armortec series. These two, coupled with a nice thick and stiff shaft adds to quite a power boost.

I recommend this racket for when you need extra power in your attacks.

Defense
For something with the word "axe" inits name, I wouldn't start off by expecting its defense to be any good. Top heavy, stiff shaft and high tension basically adds to my worries of a glass cannon racket which can only attack and will start giving away points on the defensive.

But looks can be deceiving! The Ti Max Power Axe is able to generate quite a good speed on its swing, and  that allows you to bring the weight of the racket along swift enough to take on most defensive shots you like to make.

People who play with me know that one of my favorite shots is the backhand return drive, where I place a smash from my left side down to the opposite side of the court. The Toalson Ti Max Power Axe does that with ease.

However, the racket does fail on its drive defense. I found it slower the the upwards lift and downward swipes, the weight of the racket coming through evidently when kept in the horizontal position for extended periods of time.

Attack
Axe. The word comes into play again when we talk about power. This racket is raw power. Raw. Power. That means it hits hard. Well.

A fast swing speed generated from the head frame shape brings along the power and reinforcement from the tapered inner core and the stiff shaft to create one of the hardest-hitting racket I own. This puts quite a bit of force onto the receiving racket, which weakens the quality of the reply and opens them up for the second stronger attack.

From jump smashes to a full arm destroyer (like what they do in women's singles / doubles matches), the Ti Max Power Axe performs superbly.

Though the same problem applies for the drives. Somehow the racket doesn't yield properly in the drive shot position.

Control
When you're running on so much power there really isn't a need to aim much, is there? I just place my sights somewhere in the middle of the court and let loose. They know it's coming, but getting it back well is a whole different ball game.

When it comes to the more delicate shots, expect a little inconsistency from your hands because they're likely more used to blasting the shuttle away by now. I managed to control the shuttle pretty well around the court, but it's just not one of those rackets that you'd want to use for a control-type game. 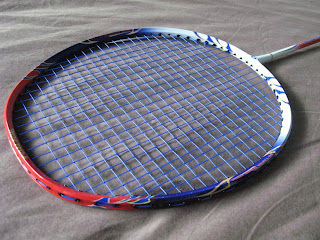