Got a chance to give this racket a try during an hour's session that I have with this promising young lad. He's been improving nicely and I'm seeing his tactical awareness grow in addition to his stamina and speed.

All-in-all, I think once he gets a hang of throwing the occasional power play, I'll be in big trouble.

So on the courts today I took the opportunity to put the AS11TH to the test. My wrist was hurting a little from a few vigorous doubles sessions and this won't be a good judge, but I felt like the experience was worth mentioning.

First off, I will go and mention that racket performs admirably when you're looking for control. As characteristic of Yonex's ArcSaber series of rackets, the AS11TH felt good to swing around and to make shots with.

Most of the shots that I attempted sailed smoothly across the net and landed neatly where I had wanted the shuttle to go. This saved me a lot of effort in movement since I could calculate where to run as a result of my shots not wavering off course.

Net play with the ArcSaber 11 TH was remarkable. There was so much control that it became a staple of my games today. I found myself throwing in the fast drop so I could tempt the opponent into starting a tight net shot challenge.

Clears and smashes weren't the name of the game because of the injured wrist, so I won't comment on them here.

But from what I've felt, the Yonex ArcSaber 11 Taufik Hidayat Limited Edition gives me a great sense of confidence in my game.

I will write a full review after the wrist recovers and I'm able to do a more complete analysis. 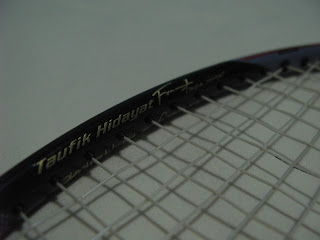 Hi! It is nice to see that the arc11 is performing well for you. I do need your opinion on this though, I am a beginner in badminton, I have never gone for coaching lessons but do intend to in the near future. However, I am stuck between two rackets, vt3 and arc11. Would getting the arc11 beneficial for me or would I just put a good racket to waste considering my skill level? I only play socially and 'learn' through watching matches on television. I can smash, but the technique may not be there. So would the vt3 be more suited for my skill level?

Well if you can afford it, the AS11 would be a higher quality racket for you to hone your skills with.

However, do consider that the two types of rackets you've listed are of different stats - the VT3's head-heavy while the AS11 is slightly on the even-balance side.

That will also affect your gameplay and development.

If you're worried about breaking a $200 racket on the ground or with another player's racket, then the VT3 (or something from another brand) might be a viable alternative till you can get a proper feel of the court.

Thank you! I will most probably go for the VT3 then and get the AS11 once I improve. I really do enjoy reading your blog. Keep it up!

Thanks for reading! I hope to keep giving worthwhile reads!

Hello! I've tried both the AS10PG and the AS10PR2012. Frankly between the two I can't see any difference besides the color.

The AS11 comes across as a sharper racket than its predecessor. I feel more accurate, the smashes come off harder (mind, I do use a higher tension for the AS11) and the whole thing just somehow feels more stable.

A slight improvement over the AS10s, if I have to conclude.