This one has been sitting around for quite a bit because there's really too much rackets in my bag to want to bring this out for a test. I've also recently went back to the trusty old Yonex Nanogy 98 and have been putting the Armortec 900 Technique until I can get the strings replaced.

But I decided against it and took the racket out for a swing with its current string. Surprisingly this racket is probably one of the few rackets that can bring out a powerful smash from the NGB99. I had a very good impression of the racket, and didn't have to bring out my spare racket for the day until the grip gave way from too much smashing.

Note. This review is my opinion of the racket from my use. Take this with a pinch of salt since we all play the game differently. I'm here to tell you, in as much accuracy as I can, how my games went with this racket. Comments welcome!

I recommend this racket for doubles play.

Defense
I rate defense above all in the game of badminton, and this racket does not disappoint. It's got a fast swing for a head-heavy racket, and the blocks that come off the racket are pretty good. I was able to take on most of the smashes coming at me, the Yonex Armortec 900 Technique providing enough power behind the lifts and stability off the blocks.

One thing I found really enjoyable with this racket was intercepting flat smashes with a drive defense. Those who play with me regularly will know is one of my favorite moves, and the AT900T really pulls this off well. It may not be as fast as the other lighter rackets I have, which makes blocking at the net a little more cumbersome, but it's fast enough to be lethal if you get yourself a flat enough smash to turn around.

Attack
Head-heavy racket, fast swing speed, the rest is up to your deduction.

Even at 25lbs, the racket was able to pack quite a punch to its smashes from the back court. I had a lot of fun thumping down the smashes and throwing in a few angles here and there.

Even with the overhead smashes the Armortec 900 Technique performs admirably. I could get quite a bit of power into the overheads, even more than my usual amount.

Drives with this racket are enjoyable as well, though not as brutal as those you get from the Voltrics. Taking aim at the body and whipping in a good one seems easy enough to want to do over and over.

Another thing I noticed, and I'm giving the strings quite a bit of the credit here, are the excellent level drop shots that I can get off this racket. The Yonex Armortec 900 Technique is able to take shuttles late enough and still keep it close enough to the net for a threatening soft shot.

I seldom write that much about a racket's attack, but the AT900T's really made it enjoyable to take the offensive with.

Control
This is one more for the strings since I think the NBG99 are really good for control (they're marketed that way to begin with - extra braided to get that extra grip on the shuttle).

Quite a number if higher-skill shots I performed today were pulled off without much punishment from the opponent. The weight transfer in the racket felt just right, whether I was going for the cross-court drop shot off a good serve return or if I was a little late in getting to that flat lift and I wanted to give a drop shot down the channel.

Lifts to the back court were done without a glitch, and the excellent defense from this racket made me feel confident that I could take on most smashes and drops.

Even with the long clears, there isn't much drag from the racket when performing an overhead, and that allows you to take to the next position quickly.

Looks
White has always been a popular color with shuttlers, and the Yonex Armortec 900 Technique is no less classier. Alternating bands of white and grey line the base of the head frame, leading to the T-Joint where the boxy font of the Armortec series comes in.

The 3 and 9 o'clock for the head frame adds to the color with signature red and black, rounding up at the top with the customary "technique" typography right at the top against a silver-grey coat. 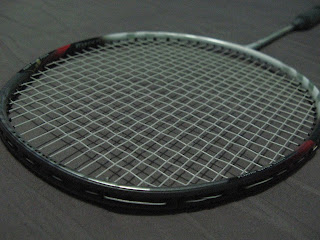 Been reading your blog for sometime now and find your writing style very easy and able to relate to.

I have a query with regards to AT900T and VT80, How different is AT900T in relation to VT80? In terms of feel, is it similar? I have a VT80 and am looking for a backup racket one which is slightly easier than the VT80...I play mainly doubles...

Looking forward to your response...Keep blogging...:-)

Thanks for reading Sanjay! Glad to be of help to any players looking for a better experience on court.

The VT80 is quite a bit head-heavier than the AT900T, some parts due to the slightly longer handle of the AT900T.

The VT80 happens to be one of the easiest Yonex rackets to pick up and use (disclaimer: for me), but as you can see from the review I gave the AT900T, the latter ain't too shabby either.

You'll prob get more power from the VT80, but the AT900T should be better in defense without compromising that much offense. I had a very good time defending with the AT900T that night during my doubles game.

Hope this helps? Let me know if you need more info, but please don't ask me to measure the length of the racket or give some silly percentage of how much stronger one racket can smash than the other...

Look out for more reviews :)

Thanks Arthur, your comments do help in clarifying the AT900T with regards to VT80.

I also happened to chance upon your review of NR700RP, now I am having a hard time figuring which would be my backup racket. :-)

The 700RP is quite a different beast from the other two.

Its head-light balance will make it difficult to switch in-between games.

Thanks Arthur, I get your point.

All the best and hope you get the most out of your decision Sanjay!

Hi arthur. How about armortec 900 tour? Is there any differences esc specs between them? Thx in advance.

Hey man, I've never had the chance to use the Tour version of the AT900.

Can't say much about it I'm afraid..

Hi Arthur. I just bought this racquet. here my prob.. i usually do BG66 and 26lbs. But this racquet has written only 19-24lbs.. So how arthur?

Well to my understanding, Yonex guarantees factory defects on the racket for three months from purchase.

Using tension above the recommended voids the warranty, but I've always gone above and my rackets don't seem to suffer as a result.

So you mean actually i can strung at 26lbs right?

You can, but it nulls your warranty.

Rackets can go as high as 28-30 lbs if your stringer is skilled enough.