So we're up to the second on the readers' choice - the Yonex ArcSaber 11 Taufik Hidayat Limited Edition. This one has been the in racket case for quite some time, and I have to thank the readers once again for actively voting to get me off my ass and writing a few reviews.

Taking off from the first impressions (link above), we're left with a well-recovered wrist and a trip to the courts with the ArcSaber 11 TH.

Initial swings were ok, the racket felt good, the weight was ok for an even-balanced racket, and I had no complaints for the shots that came off the racket.

So the games came, and it's pretty much what you'd expect from an ArcSaber - quick, powerful, versatile, accurate.

Note. This review carries my own opinion of the racket from my expereince. Comments welcome!

With that said, let's go!

I recommend this racket for both singles and doubles play.

Defense
This is probably the first thing that caught my attention. The AS11TH performs remarkably on the defensive, able to turn smashes into really quick drives across the other side of the court at the turn of your wrist. It's not too shabby when it comes to the blocks either.

The even-balanced ArcSaber 11 TH allows me to be quite creative in defense, and with the added speed bonus I can even mix a few trick shots when my brain gets to it. Double motions, no problem. High lift to net block, no problem. Smash to cross court drive, let's get some!

Attack
Here's where it gets interesting. I've never been able to get a decent smash off something even-balanced - there just isn't much weight in the head to get that thump.

The Yonex ArcSaber 11 TH denies this to a certain extent. The racket is able to generate a very decent attack. Jump smashes are a pleasure to execute, and I find myself much too happy to give the shuttle a good swat.

It gives off a good sound to boot too! The sonic metal that Yonex boasts might actually have something to do with it. The racket does give a sharper tone when you hit. Add this to the quick swing from the lack of weight, and the stiffness of the shaft, and you've got quite the attack.

It's not confined to the hard hitters either. The AS11TH gave me the more delightful drops shots tonight. The shuttle somehow resists moving towards the service line, drifting short and plunging quickly to the other side of the court with just a slight touch of the racket.

Control
Not too shabby, but not quite the level of control that the N90-III gave me though. I found some of my shots drifting too far of the sides of the courts a little off target.

Apart from the occasional blunder, the AS11TH gives a pretty good feel once I'm in a decent position to play the shots. My more creative choices came off satisfactory, with little to complain about. The weight of the racket felt just right to pull off those higher difficulty attempts at getting a point.

Didn't get much chance to take the net, but the few times that I did didn't leave a bitter taste of regret.

Though there seemed to be a little difficulty taking the cross-court tight netshot, I'm going to attribute it to the lack of skill instead of the lack of weight in the racket to lend to the follow-through.

As for the backhands, I found a little inconsistency in the quality of the shots. Having pinpointed that to my position when I hit the shuttle, there seems to be very little space for error when you decide to turn and take the backhand. But when you do hit the right spot, the shuttle teleports.

Luckily you'll be fast enough to take the attacks that come should you fail to launch a good backhand. 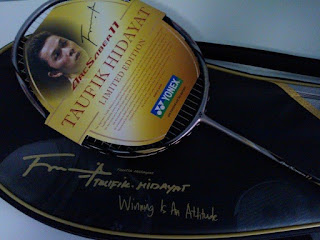 I am using the ArcSaber 11 Taurik Hidayat for all my games now. Personal choice and I haven't found one which can replace this one for my games. It is quite balance.

Any recomendations for clone of arcsaber 11? Its too pricey :(

If you buy clones you support the copying of another's idea. Generally I don't encourage that.

If you're willing to forgo the brand appeal and higher quality of Yonex and Li-Ning, there are similar high-quality graphite rackets out in the market - Hart and Toalson to name a few.

Need you view on my choice between apacs tantrum 200 ii and arcsaber 11.
Dont think about the price as based from ur experience wat is ur recommendation?

Hey there Shaiful, I've not used the Apacs racket before. So the ASA11 gets my vote by default.