Hey guys, found out some other site's been taking my article wholesale, so click here for the original site.

And if you're the guys passing off my articles as your own, shame on you.

Let's start off with the obvious - this is one sweet looking racket. Red and gold and white all over in a really nice combination. One of those that you have to get after one look.

My first impressions were pretty good. The racket showed a very good defense potential while offering up good options for attacking play. While head-heavy, it swung fast enough to give you a good edge when being attacked.

So after a restring to get the tension and feel right, I went back onto the courts.

That being said, I took it out for a run today in games of singles and doubles. Three hours later I decided that I've had enough experience with it to give a written review.

Note. This is my review of the racket, written after my personal experience with the racket. Enjoy, and comments welcome.

Defense
Very good. Particularly for the cross court drives and blocks. I found myself whipping the head of the racket rapidly to counter smashes, and it was a thrilling experience. Even shots coming in from short lifts were handled sufficiently well.

Notable were my backhand blocks in the games of singles I played. The Gosen Roots Aermet Explosion was able to guard against most of the attacks given, giving me a lifeline for an attempted escape where other slower rackets might not have.

Having a fast racket but head-heavy racket like this one is quite hard to find, and it sure feels good to know that you'll be quick and creative on the defense while having enough power from the racket to boost the quality of return.

Attack
Medium-flex rackets tend to give a very good thump when you put your arm into it, and the Gosen Roots Aermet Explosion isn't an exception.

The shorter handle adds to the power, what with more shaft to flex and contribute to the catapult effect. Fast smashes with the wrist are surprisingly efficient with this racket, and for tall players like me it gives the opponents a little more to worry about since we can whip the shuttle down from up high without too much of an arm swing.

Drives may be a little weak as a result, since the softer shaft won't allow for fast energy transfer down. I didn't find myself performing a lot of those shots, preferring to counter smashes into defensive drives instead, borrowing from the power of the opponent's attack.

Another problem with the attack for the Roots Explosion was in control.

Control
When you can't aim a powerful smash, you might as well not attack.

It took me quite some time to get used to the range in accuracy of the Gosen Roots Aermet Explosion. The softer shaft seemed to make aiming rather bothersome, each of my shots missing the mark by a rather large variable.

I found myself missing shots aimed at the back corners as well, which can be rather demoralising since they're the shots that are supposed to give your opponent a little bit of trouble.

I shudder to aim down the line with this; must have given my singles opponent at least ten points by missing the side tram lines. Conversely, I was hitting well when I switched to a stiffer shaft racket.

The power in the racket gave me good distance judge, thought the accuracy still had a little wavering. Hitting the back of the courts should be no problem with this racket.

Netplay was also commendable, with the heavy head taking credit for the ease of control at the front.

Looks
Fiery. Red and gold slashes streak the racket's head and shaft, its asymmetrical design a sight to behold. 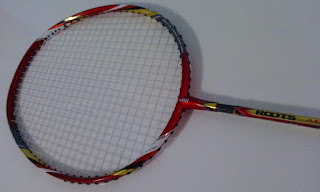 I'll take a look at the specs and see how :)

Looks like matt-finished neon colors on the pictures.. not really big on neon colors though..

Currently awaiting the arrival of the Roots Zeus - that one's hot!

How about the shiden

Dunno about that one too... just didn't strike me as good design I guess :) Maybe a little too complicated?

Hi Arthur, great blog u got here, always enjoy reading it. Just a quick question, I'm use to medium flex Head heavy racket (currently using N9 and apacs virtuoso performance as a back up). I am very interested in getting this gosen, so how is this racket gonna fair against the N9?

Thank you in advance!

I have not used both for the longest time, but I would put the Gosen at better defense, but I find the control a little loose.