So it's time for the big one. The racket that Lin Dan uses. The one that produces as much haters as supporters. The Li-Ning Woods N90.

First impressions of the racket was good - the control was top notch, and the stiffness worker more for it than against it. The cautions on the web made sense - it is a punishing racket to use. But one with a decent technique will find the Li-Ning Woods N90 a very professional racket.

So how did it perform for me?

This review is my opinion of the racket from using it in my games, my style. There are a lot of ways to play badminton, so take this review with a pinch of salt. I'm here to tell you, in as much accuracy as I can, how my games went with the racket. Comments welcome!

I use this racket for singles play.

Defense
This racket is HEAD HEAVY. Holding it in your hand you could feel gravity just trying to pull it from you. It's no joke that players who do not have confidence with their skills should not try the Li-Ning Woods N90. There are 3 main reasons why.

I will start with the first - defense. If you're not able to successfully receive at least 7/10 smashes thrown at you and place them in a good enough position to deprive your opponent of the second attack, then this racket is not for you.

I found the N90 a tad slower than most of my head heavy rackets, and this is reasonably so. The very stiff shaft and the weight orientation is not forgiving to one who cannot defend well. Those going for power can opt for a lighter and less stiff racket that will no doubt increase your game play better than the Li-Ning Woods N90.

That being said, I've found the defense of the N90 to be rather substantial, though less than that of it's cousin the N90-II. Blocks can be decently placed to areas of the court, and the tight net drop blocks off a smash is brilliant.

Though I experienced a slower speed lifting the racket from a low position on the second smash, which means I'm more likely to suffer a loss from the follow up smash, the initial defense were pulled up well and satisfactorily.

Expect good things out of this racket when it comes to defense, but also expect the defense to be less than what you're used to.

Attack
This is a no brainer. A head heavy racket with a very stiff shaft can only mean that the attacks coming off the N90 can only be extreme.

On a smash, I could literally feel the shuttle trying to run away from the string bed, slicing through the air as it makes it way to the opposite site. As stiff as the racket is, it delivers in terms of shot power. This racket is a rocket launcher.

As always, there's a drawback to all this power. One who uses the wrist watch out. This racket is not really recommended for you. The stiffness of the racket runs down to the handle, and this in turn will pull your wrist down much more than the other attacking rackets will.

The Li-Ning Woods N90 will injure your wrist if you don't practice caution.

The extreme weight distribution of the racket is also not one to be disregarded. After a few long rallies you can feel the acid build up in your arms and making the next shot that little bit harder. By the end of the session, you'll notice a loss in shot power and distance.

The N90 can take down its user as fast as it can decimate its opponents.

Control
I caught myself walking around the court a few times today during my singles games. That's always a good sign that I'm in control and can dictate the pace of the game.

The N90 gives me a level of precision that is very much desirable. The stiffness of the racket gives your shots very little variation and thus offers you a high level of control along with overwhelming power and a semi-reliable defensive prowess.

Alternative clears, drop shots, pushes and drives were all very well-executed as I used all four corners of the court to my whim. The Li-Ning N90 accords me a level of control comparable to my even balanced rackets like the Yonex ArcSaber.

One thing I noticed though, the backhands were crazy hard to pull off well. The stiffness of the racket works against you here, requiring almost perfect technique to execute. As the racket leaves your body and your elbows and and wrist start to supinate, you will very much feel the racket bring your wrist down a few more degrees than you'd like.

And with the weight of the racket working against you when you throw a backhand, I would sincerely recommend those who cannot consistently perform back-to-back court backhand clears to try more overheads when wielding the N90.

From maintaining my defensive game to turning the pace and going offense with a well-made block, the Li-Ning N90 keeps up with the game that's going on in my mind, allowing me to ease up on trying to make the shuttle keep to its flight path and concentrate on pushing the opponent around the court and watching the magic happen.

Looks
This one's a little off. Plainly decorated with red, black and a hint of white on the head frame, the N90 speaks volumes with its simple design. The paint work is definitely unassuming to its potential.

It's like the fortune of having a good game is depicted with the primary red color, while the outcome is marred between the opposing clouds of white and black at the tip of the Li-Ning Woods N90. 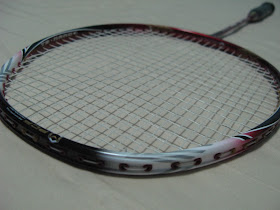