Boy this was a hard one to review! But I'm finally think I've got enough experience with the Li-Ning N55-III to give it a proper one.

I'd like to begin with the rollercoaster account of my time with the racket. Right off the bat it felt great - lighter than the purple one, faster, but still offering the same power and steepness of attack.

The defense was memorable as well, and it all seemed like an easy choice to review.

But then one fine Saturday, on my last run before the review, I found something strange about the racket. I suddenly faced loss in control and considerable loss in shot quality. Clears began to become shorter and smashes were hitting the net.

That prompted me to give the N55-III a little more time to run in.

And about three weeks later, here I am.

Note. This is my view of the racket, written after my personal experience with the racket. The pure nature of a review is to inject a perspective into a situation.

And here is mine.

Defense
For something so head heavy, the N55-III performs remarkably well in defense. Might have been something to do with the air-stream slots cut into the head frame, but I doubt it can do that much of a difference.

So, due to unknown reasons, the head heavy and heavy racket manages to turn away most attacks that came my way on the courts. I found that the weight accords me that little bonus in power when I block shots.

Smashes were turned in to net drops for clear winners with the Li-Ning Air-Stream N55-III, and it felt good. Defending with this racket feels natural and quick - the ease of positioning the shots remained the truest of the arsenal I possess when yielding this racket.

I've only ever had the chance to do some drive defenses, and those turned out pretty well too.

Attack
On to the sweet stuff. Li-Ning rackets are known for their abusive use to head heavy orientation to obtain the powerful attack, and this isn't an exception.

The head heavy N55-III gives you a very satisfying boom when you hit the shuttle right, probably also again likely due to the air-stream system incorporated into the head frame.

The shuttle speed ain't too shabby either. Many times my shot came back half court, readying itself for another whacking. The combination of low angle and quick acceleration really gives the Li-Ning Air-Stream N55-III an edge in the offensive game.

Whether it's a hard smash to down the lines or a quick snap of the wrist pull off that surprise attack, the racket is a joy to use.

Control
Remember the front when I said the racket had two personalities? Some times it's hot - throwing the opponent across the courts with well-placed angles. Some times it's not - seriously,  I cannot explain the frustrations I get with this seemingly wonderful piece of equipment.

So I found out the truth today. This racket drains your arm strength rather quickly. After a few games, I started to lose sight of the sidelines and especially the back court. A short swing seemed to send the shuttle the wrong way.

About four games in (I played six games of singles tonight) I found that my backhands are losing quality and I was getting smashed at as a result.

All because this racket makes fatigue build-up a very real thing.

Looks
This racket is gentleman dashing - silver and gold streaks flanked by a black and silver shaft. It gives off a gun metal feel that is oh-so-charming. Must buy. 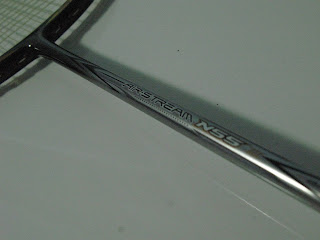 Hi Artur,
Nice review. Could you point out the difference between N55-3 and N55-1 if possible.

Secondly now that you have used both N55-3 & N90-3, could you say the difference between the two in terms of head heaviness & Shaft stiffness.
which of these 2 feels easier to use.

Hi there, thanks for reading! The N55-III has a stiffer shaft and swings faster, though the N55 feels like it delivers a better smash.

The N90-III feels lighter and has a softer shaft, and I've gotten a better experience with it.

Hope this answers your questions!

Thanks Arthur.
One last question , In terms of head heaviness does N55-3 feel a lot heavier than N55-1.

They both feel about the same actually.

The original N55 is one of the best amongst the models from that generation. It is under rated and not very popular amongst social player who typically favour N90, N50 and N70 over it.

Couldn't agree with you more, Francis. The N55 is a great racket to use.

My new N55 is like a beast. Flexible shaft but some how the shots are very well controlled. Power was good and it moves suprisingly good for something that heavy. My new go-to :)

If yu compare the N55-III with Yonex Voltric 70 and Voltric 80
Which is the the best choice?

Wich one did you get the best shoots with?

Oh you found it!

Hello Arthur! Great review! I always read your reviews especially your reviews in li ning and yonex rackets. Just wanted to ask you if you will do a review on li ning n55-II? I really want to know your thoughts on that racket and how it compares to n90-III and n55-III? Thanks. :D

Hey man, thanks for reading and also for being a regular reader!

Unfortunately I've since sold the N55-II and am unable to give it any more court time for a review.

I do have a first impressions for your reading.

Overall, the softer shaft of the N55-II makes it a very racket if you smash with full-on swings like I do.

THe N55-III offers a very head-heavy variation with a much stiffer shaft, and the N90-III comes in with a larger head frame and more even-balanced feel.

Thanks for the reply! For that short period of time you played with the racket. How would you rate it in offense, defense and control? Thanks again. :)

Yes, Thanks man! Last question. What string and tension would you use to bring out the full potential or full power of the racket? Thank you so much! :)

Stings are totally dependent on the user, I'm afraid. You'll get used to a certain type of string and tension.

I rotate between 2 Yonex strings - the Nanogy 98 that I usually put at 27lbs, and the Nanogy 99 that I put at 25 or 27lbs depending on the weight of the racket.

Can't help you there man.. I've not used the string before and don't know what it feels like..

Owwww, thanks. Keep up the good work! I'll be reading more reviews from you. You are a big factor that affects what racket I should buy. Thanks again man. :)

Thanks for the vote of confidence! Happy smashing!

hey arthur any difference between the two colors?

I've only used a racket from each color, so can't really tell.

My experience is that the purple one is heavier.. but that could just be a manufacturing thing.

Thanks for your valuable feedback, i'm new into, i used n55 3 both color, i found sliver is more HH, maybe i'm wrong, My question is here, for Attacking player what string power should be okay, from 26 onward til 32

Hey there Akhter, strings are a personal thing so I would suggest you try with a tension that's ok with you first. I stuck with 27 because it's the best for me after trying 26 onward to 30. No simple way I'm afraid.

Yes I share the same experience. The N55-II is a juggernaut.

Hey there Naveed, thanks for reading!

The N9 has a softer shaft and is more evenly balanced than the N55-III.

I think this case it'll have to come down to your comfort level with a stiff shaft versus a softer one. For doubles play I would think the N9 will come off a little better, given how you will have more time to set up.

Great blog, thanks so much for doing these reviews!

I recently purchased a voltric z force ii as a result. That aside, would you happen to know a good place to purchase a Li-Ning N55 from in Singapore? I have a family member headed over there this month.

Thanks for reading man!

There's a place in Singapore called Queensway Shopping. You can get a plethora of sporting equipment there.