What happened to all the budget badminton rackets?

I started this blog at a time when a badminton enthusiast was spoilt for choice when he wanted to buy a new racket.

There were so many brands, and each had their own take on how best to twist a turn sheets of graphite into a shuttlecock beating wand. With the competition they all had to ensure that their products were great - that meant no cheap material or design; rackets were made in countries like Japan or Taiwan with high grade graphite and some form of technology ingrained into the design.

I remember Karakal, now best known for their replacement grips (they're really tacky), and their SL60s / 70s. They were the lightest rackets in existence and gave the front court players something they could really blaze around the court with.

I remember Toalson and Hart - $50 - $80 marvels where simple designs meet high quality finish, showing the mileage you can get just by using superior material. And to add icing on the cake, each of their rackets also came with a full sized 4-racket bag.

And then I remember Prince. They were pioneers of technology with their Y-shaped racket head and their oversized head frame. The latter offered a more forgiving experience for players who want a wide swing, and was the predecessor of the "tri-voltage" head heavy allocation with its "Triple Threat" technology (yes, Yonex wasn't the first to Voltric), and the former increased the size of the sweet spot by literally compacting the frame upwards.

Carlton was another of my favourite brands. Their range of rackets - Fireblades, Vapour Trails, Powerblades, and Airblades were among the best designed rackets you could get your hands on.

There are so many more - RSL with their additional weight system (yes, before Yonex's eTune) and diamond head frame where they twist and swirl the frame for additional strength; Yang Yang with their 'sand wave technology' that gives the racket additional rotational energy because of literal moving sand within the head frame (yes, before Yonex's RGS); Bekia with their brand name knock-offs that play exceptionally well (great material quality once again); and Gosen with their two kick-point system where they cut a slight groove in their first third of the shaft to allow greater shot angles.

Image all that! At your local store! For cheap!

Now you're either paying $200 for a Yonex, $300 for a Li Ning or Victor, or an arm and a leg for the highest end Mizuno. It's no longer a budget player's playground (extra points for anyone who knows that pun).

So imagine my delight when I actually saw a few of these at my local store this afternoon! The nostalgia shot up in my blood, and I grabbed a few to swing around. I test the weight distribution, the swing speed and weight, the design and handling.

I was a schoolboy all over again.

Everyone, meet the Flex Power Air Blade 99. The name means nothing. There's a Malaysia flag on the cone. The stock grip tape is as cheap as they come. But heck it's a nice racket to swing around, and will beat any Yonex Mid-tier offering hands down in quality. 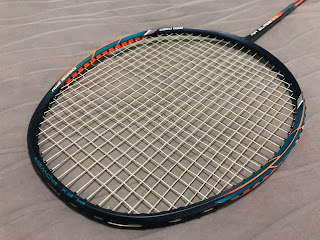 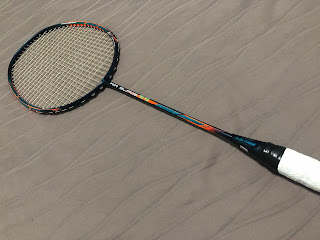 I have it strung with my go-to Yonex Nanogy 98 at 31lbs (the racket can hold up to 33lbs). The shaft is slim and stiff-flex, and the maker states it as a 4U racket (80g +/- 2g). The grip is G6. The head frame is tapered at the edges like a Victor Bravesword. The inner frame has ridges to support increased string tension. The cap has as Energy Boost design similar to that which you see on the Yonex Astrox.
No one will care if I write a review on this racket, but I just might. Just so I can bring back the memories of a time when I played badminton a few times a week and spent weekends talking rackets with my buddy and the stringer at his shop.
Posted by Arthur at 00:30

Everything had become too expensive. With yonex conquering all national team, lining become exclusive premium item, victor tring to be in between (fashion brand and performance). We wish these indie brand can penetrate the market. But even felet start to increase their price esp the pro player model.

Btw nice to have you back. Looking forward your review

Excellent writing job as usual on our favorite subject ... badminton equipment! Receive my gratitude for this! I await the continuation of your comments about this last little nugget yet on your experience with the yonex astrox 99 pro 4UG5 version.
My personal benchmark racquet model is Victor's Bs10, I long thought it was the only racquet that really suited me even though I had trouble finding the same Bs10 twice on the market. (stiffness, weight, balance depending on the country code) ...
I usually present my comments on the forum of the French site devoted to badminton, badmania.

Glad to be back! I've been having fun catching up on singles games with a few like-minded fellas whose skill levels aren't that far from mine. Feels great to be running back on the court again!