I remember the day I saw this racket. It was one of those that made you say "I'll buy this one." The weight feels good and the design's great - what else is there to ask for?

When it was time to take it to the courts, it only got better. The most impressive shot I managed to perform with the Vanquish was a cross court backhand from corner to corner. I've since changed the strings to a 24lbs BG66 instead of the original 26lbs BG 66 Ultimax, and it's impacted my game positively.

Defense
Fast. Fast. Fast. I'll start by crediting the slim head shape that Carlton calls 'Optimetric'. Basically it's an in-between of the isometric and the oval, and it gives a nice slim top to the head, kinda like the Yonex ArcSaber Z-Slash.

That allows the faster swings and response time needed for defensive players like myself. The slightly larger head area and sweet spot (compared to the ArcSaber Z-Slash also allows better control and less mistakes). Add the lightweight 4U frame into the mix and you've got yourself a nice and fast racket in the Vapour Trail Vanquish.

I've a personal liking to shorter grips, and the Vanquish follows in the fashion of the Carlton Fireblade FX8, offering up a grip that fits my hand perfectly and allows a very fast grip change for when you need it most.

Attack
If you've had the chance to hit a proper smash with the ArcSaber Z-Slash and saw how fast the shuttle can go, then you'll be left with the same experience when you hit a smash with the Carlton Vapour Trail Vanquish. Smaller head and shorter grip ensures the player's smashes are optimal and sharp; all you've got to do then is watch the opponent pick up shuttles from their side of the court.

The guys I played with also noticed a nice sound when I hit smashes with the Vanquish. That's a plus point for most players I guess.

Control
The last time I wrote about the Fireblade FX8 I praised it's high level of control and how it allows me to worry about tactics instead of whether the shuttle's flying off-course.

The Vanquish actually gives slightly more control than the Fireblade FX8 because of the even weight distribution. While punching clears might require a little more elbow grease, the accuracy trade-off is well worth it. Drives left and right that I use to throw opponents off-axis are easily executed without fear of the shuttle going out the sides or the back.

Net shots are compromised slightly because of the smaller head size, but the quickness of the racket allows one to give more allowance when attempting the trickier ones.

One more thing to add is the nice and small cap that allows people with smaller hands more comfort when handling the racket in defense.

Looks
The Carlton Varpour Trail series of rackets all come in the same design, so it's just the color-code that separates one from the rest. The Vanquish is a combination of yellow, lime green and olive, and it turned out pretty ok to have had me say yes to parting with my money from the get-go.

While Yonex tends to use tribal marks and swishes into its current range, Carlton's sharp and short curves makes the design stand out more to me. Selective chromatic finishes to the text also give a level of depth absent in the other rackets that I've seen.

Comparison
The Carlton Vapour Trail Vanquish is one of the rare rackets that I'll use for both singles and doubles play. Because of the flexibility of the racket, I'll rate this among my most favourite rackets, probably next to the Fireblade ahead of the Voltric 60.

But mind you, that's not by a lot either. The Vanquish made my games fun, calculative and very dangerous at the same time. I was able to slow my game down and consider more adventurous shots when the others rarely give me the chance.

Carlton Vapour Trail Vanquish - the racket with the slow-mo button. 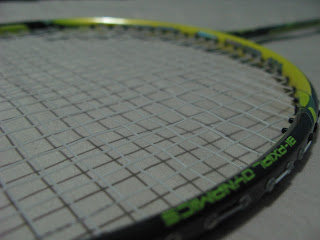 Thank you for your reviews, it helps me a lot since i plan to buy one :D

You're welcome! I'm pretty happy with how the vanquish turned out for me - it's got a good balance of offense and defense for the versatile player who wants to rotate his game.

After tomarrow, it shall be mine :p

Great! Let me know how it goes!

I just tried vanquish and after few session, I have to say it is great. I recently played also with z-slash and is noticebly heavier than vanquish but also great. I managed to get old carlton fireblade s-lite and with 4 gramms overgrip and ashaway strings- MicroLegend- perform also great. thanks

Sometimes, it's because the player is great :)