I have a thing for oversized-head rackets. They seem to offer a really good combination of offense and defense. that makes them the Jack-of-all-trades for badminton rackets.

I bought this lesser-known brand after I had the chance to give the racket a go at the recommendation of my regular seller.

Turns out the Taiwanese are good for rackets after all (I still hate them Victors)! Went back to the guy and bought it off with a change of grip.

This review is from my own opinions of the racket, and of the game of badminton. Take this with a pinch of salt.

I've used this racket for both singles and doubles play.

Defense
True to all head-heavy rackets, the Bekia Twisted X8 responds a little slower when compared to a lighter 4U racket. It's saving grace is its larger head, which gives you more allowance when making that quick defensive return.

That big head of its also improves the quality of the returns by quite a bit. Hitting a drive off a smash was quite a possibility with the Twisted X8.

The shorter handle also makes for faster shot making, what with the player not needing to move his grip much to get that same quicker swing.

Attack
This is what made me buy the racket. Smashes come off this racket fast and furious, often to the extent of being addictive. I find my game gearing towards being fast-paced and destructive with the Twister X8, so I'm seriously considering placing it under my Doubles Racket label.

I've previously written my vote of approval for over-sized heads and short grip handles, and the Bekia Twister X8 has both! Full-on, check smashes, net taps... the works!

Control
Placement of the shuttle at various sides of the court were marginally good, though I had trouble making my backhand shots go straight down the line. The weight of the racket gives a nice boost to your clears and that little more speed when you need it to.

Touches were good, and the net shots proved to be satisfactory. Lifts from the net were reasonably far back, and backhand shots carried a nice distance.

Looks
Fierce; primarily back with red and gold accents. The red strings made it look even angrier. Not very characteristic of the kinds of color palette that I usually go for, but it's nice on the eyes at least. 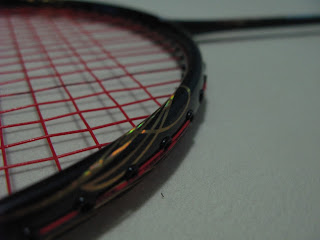 hello
how much did you spend on this racket?

That was so long ago I don't quite remember man..

Can you sell me your bekia twister x8? I like this racket very much,but it went out of production.

Yes it did, but unfortunately I've sold mine already.