This is my first serious racket, and it's taken me that long to have a good enough hold on it to write a review confidently. The first impression I had for this very technical racket was its weight. Took me awhile to get used to a 3U one (considering I started out with a 5U APACS), and I even thought it was head-heavy!

Now, a year down the road, my skills have improved substantially and I'm able to properly wield and use this racket to better effect.

This review is from my own opinions of the racket and the game of badminton. Take this with a pinch of salt. If you've got any questions on this racket, feel free to ask.

I've used this racket only for singles play.

Defense
Being an even-balanced racket, the defense rating for the ArcSaber Z-Slash TH does not disappoint. However, it takes a little getting used to because of the smaller head, which sometimes mean a frame hit here and there.

This special characteristic of the racket allows for quicker swings and harder returns on defense, and that is always welcome.

Switching from side to side was easy, the same I'd expect from an even-balanced racket. Holding the ArcSaber Z-Slash TH, it feels a little longer than the other rackets I have, and that translats to easier reach for netshots. Just a hunch.

Attack
Advertised as the racket that produced the fastest recorded badminton smash in the world, the Yonex ArcSaber Z-Slash TH takes its aerodynamic frame seriously. Cutting across the air with a very crisp sound, the racket gives its wielder very little air resistance when swung.

However, the lack of weight in the front makes the racket lose out to the Voltric 80 in terms of raw power. Comparing it with the ArcSaber 10 PG however, the Z-Slash TH seems to edge out a little bit.

But we don't all win games with smashes, don't we? I noticed that the hits coming off the Z-Slash TH takes advantage of its quick swing speed, delivering the drives and check smashes at a delectable pace.

Control
Here's where this racket shines. When you're able to get reasonably good hits off its small head, the ArcSaber Z-Slash TH offers a very acute level of control. There's not a lot of room for error, but you'll be glad you took the time to tame the beast that is the Z-Slash.

Looks
I've no complaints against most of Yonex's racket designs, and the Z-Slash TH is no different. Taking the official colors for Taufik Hidayat, red and black, the designers added a dash of white and gold for that motion blur effect when you swing the racket head. 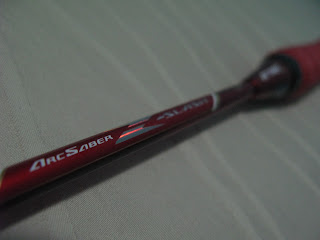 i agree what u said on this....
i never use this racket but im using edgesaber z-slash which looks like the twin of this racket...
just bought it 3 months ago n took some time to get use to it because of smaller frame but overall im impress with the quality it delivers....
considering it's just 1/5 of the price of this arcsaber....:-)

Thanks for reading! This racket's my first Yonex, so it's got a special place in my heart.

Also good that it's a nice racket to play with!

But no offense to the APACS fans out there - I've used APACS rackets and then the Yonex ones, and I've found that the Japanese-made Yonex's are in a different class.

From hitting to the power that you can get out of them, you'll be surprised at the different levels of quality.

If you do get a go at the Yonex ZSTH, do let me know if you felt the same way I do :)

I own two of this racket and one of the best player in our club is trying to buy one of it from me after he broke his.

This is not the easiest racket I'd ever use but the best so far. Superb control and you can still get pinpoint accurate attack. I know Voltric 80 have a more force on smashes, but with this one you can smash for two hours not hurting your arm. More comfortable to use basically. I own both Z-slash, in my opinion this TH version felt more flexible compare to the original yellow. I only disagree that you rate this racket only 9 compare to Voltric 80 which you rate 10, where as a matter of fact the Z-slash has the better control on shuttles.
I own the VT-80 before which I sold because after using it in a half-day tournament it given me arm aches for a week which I never experience with the Z-slash.

Hello Irwin! Thanks for reading, and it's nice to hear another player's opinion about my reviews :)

I agree that the Z-Slash could potentially have more power and control than a VT80, but that would come with a lot of time on the rackets, and also in the game of badminton.

The rating for the VT80 were given from my perspective as a player, and I'm definitely not in the same level as you are (no tournaments, just leisure), so I gave the VT80 a better rating because it worked more consistently than the ZSTH.

Is it possible if the yonex archsaber z slash be off spes? I tried this particular model but found it to be very flexible and head heavy as opposed to the specifications found on the Internet.

The Z-Slash is naturally whippy, and some would say it's more of a medium flex racket than the Voltrics.

As for the weight, you'd want to try to wrap the grips a little higher to off-set.

Rackets are seldom perfect since some handicraft is required to make them, so I won't expect for each racket out there to be identical.

Thank you Sir for your reply. Really helped me a lot. Great effort and awesome review!!

You're most welcome. Thanks for reading and have fun with the awesome racket!

I loved this racket but the small head of this zslash is really makes me frustrated. Do you have any recommendation of other racket which is similar to zlash but a bigger head

The Z-Slash presents a fast swing speed with even balance and a shaft leaning towards medium flex.

The closest I can come up with in the Yonex arsenal would have to be the Z-Speed or the Z-Force.

The former is head light and the Z-Force is head heavy; both coming with their own perks and downs.

Both also have the characteristic sharp oval shape in the head, though the Z-Slash seems to be the most extreme.

If you're looking at something easier to handle, might I suggest the Voltric 70?

Thanks for the reply

I will call u Arthur, hehehe. So Arthur , i read your review on n9. Does it same with zlash ? i like to whip rather than swing in playing

Thanks for the reply

I will call u Arthur, hehehe. So Arthur , i read your review on n9. Does it same with zlash ? i like to whip rather than swing in playing

It's powerful, but considerably heavier...

hey arthur... i m going to buy z splash... can u suggestion me the best stringing for it? thank u... i like to play fast n hard

The string of choice for the racket seems to be the Yonex BG66 Ultimax.

Any difference between zslash yellow and the TH version?

Hey there Scott, I wouldn't know. Haven't had the chance to give them a try.

The red one looks better in my opinion though :)

Should I get a Li ning n90ii or a nanoray z speed?

There's almost no context in that question, so I'm going to tell you to buy anything you want.

I own an ARC I-SLASH
Can you compare Yonex Arcsaber I-Slash?
What's your opinion on I-Slash.

I think the I-Slash is a close relative of the Z-Slash, albeit less satisfactory in performance.

It was released in a period of time where racket technology is stagnated, so my thought was it's a rushed product.

Hello, I recently bought an Arcsaber Z slash.
Do you think it competes good with the Voltric 80 etune.
I could have bought the 80 etune, but from long time i wanted the z slash.

I've already played with I-slash which has same compact frame as z slash....so i'm used to with compact frames.

Do you think i made good decision ?