This is a readers' choice review.

I've written quite a bit of reviews and still have quite some rackets left over, so I thought I'd start a poll on which review the readers would want to read next. Many thanks to those who took time to vote. I'm also thinking of an open-ended poll to see what sort of badminton article you would like to read so stay tuned and keep your questions ready.

Now without further ado, I shall attempt to give a fair review for the Yonex ArcSaber 10 Peter Gade:

This is the last of the three World Beating Performance rackets that I got my hands on, mainly because it's hard to find.

The AS10PG comes in a gentleman's white, laced with gold streaks down the inside of the head frame and shaft. At first glance, you'll most definitely feel that it's one handsome racket. Very befitting for the prince of Badminton, Peter Hoeg Gade.

One of the main reasons the review took so long to write was because I wanted to get enough games in to give it a fair trial, and it was quite hard at that moment because I was suffering from a bad case of GAS - Gear Acquisition Syndrome.

So now, half a year after the pristine racket reaches my hand, I am ready.

This review's my opinion of the racket from using it in my games, my style. No one plays badminton the same way, so take this with a pinch of salt. I'm here to tell you, in as much accuracy as I can, how my games went with the racket. Comments welcome!

I use this rackets for singles play.

Defense
There's something magical about 3U, even-balanced rackets when it comes to defense. Somehow the racket head moves fast enough to meet the fastest smashes, and still is powerful enough to deliver a nice high block when you need it.

The Yonex ArcSaber 10 Peter Gade delivers well in this aspect, and even adds a little stability to boost your defense ratings. Standing strong in defense shouldn't be a problem with this racket. The slight boost to speed given by the even balance also allowed me to play around with the returns, varying them from left to right depending on how fast my mind could think.

Drive defense seems to benefit from the AS10PG as well, providing enough to return straight shots with equal ferocity.

If you're a wall in defense, this racket will be a nice addition to your armament.

Attack
With a good defense, you're able to turn a properly executed block into a nice attacking opportunity. And the ArcSaber 10 Peter Gade ain't too shabby in this department.

I found that I didn't exactly live for the high lifts when using this racket, as compared to when I wielded the Voltrics or Powerblades. The AS10PG just didn't give the attack power that's present in the head-heavy rackets that I own. The shuttle reaches a decent speed, but it's nowhere as explosive nor addictive to attack with.

While you'll need some time in the gym to be able to crack the whip on the shuttle for this racket, the drive attacks you execute with this racket will amaze you. Once again, the even-balance combination of speed and power delivers distinctly on the drives. ANd being strong defensively, you should be ready for a drive return if the opponent does manage to catch your silver bullet.

Control
Being even-balanced, the AS10PG doesn't deliver as well in this area as the Voltric behemoths, but it's redeemed by its tight controls. Technical players who enjoy hitting the lines, rejoice!

I felt extremely comfortable playing with this racket because I knew that it will place the shuttle exactly where I want it to.

With the Yonex ArcSaber 10 Peter Gade, you'll stop looking at the racket when you mis-hit, because you know in your heart that you can't put any blame on it.

Looks
I don't think any player can look at this racket and not want to own it - white, gold, black and grey come together in a very handsome creation.

Underneath the main colors, a throbbing red core stands as a red "P", signifying the passion of one Peter Hoeg Gade. 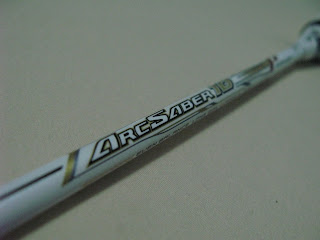 could you please compaire arcsaber10 PG with arcsaber10..im looking forward to buy any of them..

To me, the only difference is in the color.

You're going to have to turn to the forums for this one, I'm afraid.

Agree your comment.
1. it is really hard find from market. But luckily I finally get it last night from a pro shop.
2. When you get miss hit, you should ask yourself not the racket.

How about the new arcsaber 11?

Will you review the arcsaber 11?

hello, I'm considering a new racket after all these years. I've been using voltric7 since I can remember and it suit my game very well. but for this particular half years, I've realized I've lack that lil bit of omph in my smashes or lifts, which kinda annoys me. I've adjusted my string tension to a even higher one to 25lbs, which now feels even better, but I still feel the source still lies with the racket. Consider the fact, that I've been playing it for 10 years, and I see myself as a high-level amateur, I'm hoping to buy a premium racket which really brings my game to another level that i desire. I'm thinking about voltric70 or voltric80. I've read both reviews about these 2 rackets and I am aware of their user-friendliness. Since I'm looking to get a serious racket, I wanna get opinions from all corners as much as possible. I think that the even head-heavy of vt80 is the one I'm looking for but I'd never tried stiff rackets before. Since I've been using vt7 I think vt70 is more like an upgrade right? I like the flex of it despite having a head less heavy than vt80. Not to mention, this greatly reduces its weight felt when I'm swooshing it across the air. Should I go for vt80 with a even head-heavy, but stiffer and heavier racket, or stick with vt70, since its an upgrade it should be better than vt7, and despite that omph problem I'm having, I couldn't ask for more from this racket. There's pros and cons and I'm quite puzzle for my next move :(

Both the VT70 and the VT80 give a satisfying smash.

The VT80 is slightly stiffer, but the difference should be nominal for a player of your level.

Guess all you need to decide on now is which one has the better color.

Both the VT70 and the VT80 give a satisfying smash.

The VT80 is slightly stiffer, but the difference should be nominal for a player of your level.

Guess all you need to decide on now is which one has the better color.

And it's me again, I'd decided to take vt80 again after some time of research and testing but now I'm torn in choosing between the peter grade version or the normal one. The normal one has a similar weight feel of a vt70, you'll only feel it's weight when the shuttle impacts with the racket. While the normal one you can feel its weight by swinging it in the air.

They're both the same to me actually. A coat of paint doesn't actually do much to the specifications of the racket.

Hope you find one that's fitting to your style!

Very nice review. :)
I bought arcsaber 10 few months back. (the simple version and not the PG version).

To let you know about my game: I like to hit accurate half smashes, and I love to flick the shuttle and watch opponent dance. :P

Further more I am a quite thin guy and so my game is not much of power-oriented like Lin Dan.

I would like to see having good, accurate defense when I am going against such guy.

Any information, like what kind of tension is used for what will be much appreciated.

Thanks and regards,
Sanket

Hey Sanket, sounds like we play quite a similar game :)

I bank my hopes on the NBG98. Gives great control and feel. Not too good on the attack, but I'm not a heavy smasher anyway.

As long as the shuttle brushes the line eh?

Hello Arthur,
I have read many of your blogs and they are really good.
I am an intermediate player and I have been using Yonex carbonex for some time. Need to change thmy racquet. I am not a big smasher, like to play more of drops and placements. Like to play more of a controlled shots along the side line and corners. I generally play single as well as doubles. Which racquet would you recommend?

Hello Nilesh, thanks for reading! I enjoy writing about badminton. Seems to be a draught of rackets lately huh?

The Yonex ArcSabre Z-Slash or 10 plays well for players like us. Though for doubles I like to switch to something a little faster like the Z-Speed or the Victor Bravesword 10.

hi
can i know what the different between arcsaber 10 and 11 ??
im considering this two racquet but cant make my decision

The AS11 presents a slight head-heavier orientation and a stiffer shaft, basically a more modern interpretation of the even-balanced racket, allowing more emphasis on power than defense.