This is another one of those that escaped my GAS when I was Carlton crazy. It was elusive until I had the chance to get a second-hand one at a good condition from a guy from BC.

This is also the racket that changed my mind about the string tension that I normally use. It came strung with NBG98 @ 25lbs, which I initially thought was too high for me. Upon more frequent use I found that the 1lbs increase from my usual is actually a good thing, and it stuck ever since.

As for how the racket performed, I had thought it felt like the wonderful Fireblade FX8, but the more I use it the more it's got its own feel.

This review's my opinion of the racket form using it in my games, my style, so take this with a pinch of salt. I'm here to tell you, in as much accuracy as I can, how my games went with the racket. Comments welcome!

I use this racket for singles play, but seriously recommend it for doubles.

Defense
This racket is fast. And with an even balance, it's got enough push to send the shots to where you want to get an advantage. Swinging the racket around gives you a nice and sharp swoosh, not a very common trait in rackets unless you're wielding a Bravesword.

However, the flex in the shaft doesn't help much when you want to give a good lift to the back of the court from a smash. Those who like to test their defenses and tired the opponent out with high lifts should take note of this.

To make up for the lack of lifting prowess, the Carlton Airblade 35's drive defense is impressive. I'm able to whip the racket around to push the shuttle nice and flat across the sides. It's one of my favorite form of defenses, and this racket allows me to pull it off with ease.

Attack
Here's where this falls a little short. The flex in the shaft adds well enough to the attack, but given the light weight of the frame, it's better off being stiff if you're after something with a little more threat. Smashes with the Carlton Airblade 35 come off the string bed with a loud punch, but somehow the shuttles don't travel fast enough for my liking.

Your best bet with this racket is probably the drive shots, since the lighter frame allows the execution of one fast wrist snap.

Control
This didn't feel as good as I thought it would. There's a missing feel that most other good rackets will have. The shots coming off the Airblade 35 are a little softer to feel, a little loose, and a little too unpredictable for my liking.

I wasn't able to place the shuttle as well as I wanted to, and this affected the quality of defensive and attacking shots in the game. I'd blame this on the softer flex of the shaft, which makes me wonder if 4U rackets should just all be stiff so that the control doesn't suffer much.

Looks
The elegant Carlton Airblade 35 comes in black with white accents throughout the head frame and shaft. The signature rubber grommets, the predecessor of the V12, are placed at the 3 and 9 o'clock positions, yellow and outstanding from the black and white of the overall design. 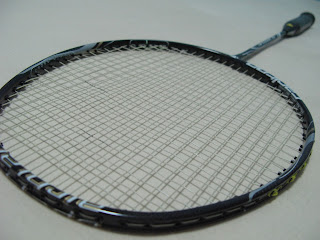