So it took awhile for me to get here (what with all the new rackets that I got my hands on). The Victor Bravesword series of rackets have gained quite some fame for themselves with their fast swing speed.

This facination with the Bravesword 10 started when I purchased a replica from Bekia (who have gone on to make their own named rackets) which performed very well. In fact, it's the only racket that I gave full marks for so far. From defense to power and control, there was nothing that I found lacking in the Bekia Bravesword 10 Replica.

The original Victor Bravesword 10 tested out well in singles play, though I soon found it lacking in weight to play for long. I took it out for some doubles action yesterday and it surprised me with its accuracy and speed.

So without further adieu, the review.

Also, starting now I'll try and include a one-line round-up for the racket I'm reviewing, to give an overall impression of what I think the racket is good at for me. This comes at the end with the picture(s).

Note. This review carries my own opinion of the racket from my use. Comments welcome!

I recommend this racket for doubles play. Too even-balanced for singles to use for long.

Defense
I like defending. It gives you a great sense of satisfaction when you manage to turn your opponent's attack into a mad scramble to an uncovered area of the court.

When the Bravesword 10 was first used in my doubles game yesterday, I found just that. If the attackes from the opponent were too flat, I was able to drive defense it across the other side of the court. Given the stiffness of the racket, I was able to generate quite a bit of power to lend that drive sharply past the front player.

When the shots were too low to drive, the swing speed of the Victor Bravesword 10 came into very good effect. The racket was able to respond to almost all of the smashes thrown at me, with satisfying results. Despite the stiffness I was able to move the racket about and change grips at ease before the shuttle came to me, and that allowed me to vary the defensive shots if need be.

Attack
This is where the even balance of the racket dragged it down. The Bravesword 10 didn't manage to throw off the power smashes that the rest of my rackets could do, even if I gave it my all on the smash. Somehow, the lack of weight in the front didn't allow me to get off as much power as I wanted to.

Which made me favor the front of the court a lot when I played yesterday. Most experiences at the back were the sharp smash downwards or the drive forward before I moved up to close off the front.

It's good, but not really the choice if I were to come up against defense-crazed veterans.

Control
Amazing. So seldom did my shots fly off course with the Victor Bravesword 10, be it defensive drives or attacking smashes. The shuttle just seemed to fly where you want it to, and I give it to the extreme stiffness of the shaft.

Though I did find a little difficulty controlling the tight net shots (not enough weight at the front I guess), the racket came off very well on control.

Looks
Seems the Victor Bravesword series have come to adapt a similar look - primarily grey with the different accents for the various rackets.

The Victor Bravesword 10 comes with black and white accents down the 5 and 7 o'clock of the head frame. The "Sword" decal comes branded in gold, as bright shiny red text adorn the shaft of the racket. 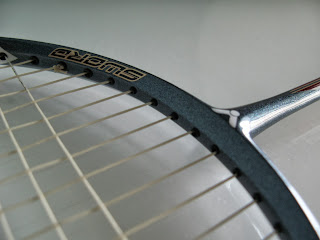 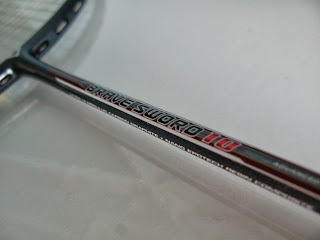