Thanks all for participating in the voting process!

Looks like the Li-Ning N90-III is very much in demand for the moment. I hear you, and I've been taking special attention to use the racket in my games.

For now it's seen about 5 games of singles, and the results have been quite good. 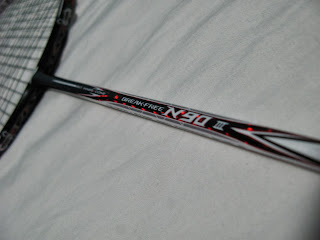 The first few swings with the racket has been rather pleasant, with the shuttle moving to the back courts and around the corners easily enough. The smashes were nice and sharp, with the racket head coming down really swiftly and without any feel of drag.

Honestly, the Li-Ning N90-III resembles the N80 quite a fair bit. In comparison, the head frame, flexibility and weight distribution are almost identical (at least to me).

And even after a few games of singles, I still couldn't tell the two apart. Maybe it's because I've not really had a lot of time with the N80 either. Shame on me for racket neglect.

While the N90-III is capable of a few powerful shots, the accuracy drops a whole lot when you miss the sweet spot. You'll get a very hard and sharp feedback sound when you do, so you'll certainly know.

Forehand clears seem to miss the mark a little bit; I wasn't able to get the shuttle as far as I wanted it to a couple of times. Backhands also lacked the accuracy that I've grown to love in the Victor Bravesword 10.

Defense-wise, the racket performs pretty well. The fact that it's not as heavy as the previous N90s is probably the reason.

I'm using the Pro-Kennex 63 Flex for this racket, and the tension seemed to have dropped a fair bit since I've started hitting. I'm going to give it a change to see if it helps.

Stay tuned for the review!

Thanks for reading, and I hope you found my articles useful.

The II feels more powerful, being heavier headed and all. The shaft for the II also feels more flexible.

From my time with the III, I found it significantly lighter and with a stiffer shaft. Not as powerful, but faster and more agile.

So to answer your questions, I guess it'll have to depend on your style of play.

I just read your review of the n90III. I'm looking for a li ning racket that's more suited to doubles (specifically front court) as i play a lot of flat drives and try to intercept a lot.

I prefer stiff rackets that are hh or slightly hh so at the moment my go to racket is the at800DE, ti10 ltd or armortec tour.

I currently have an N90III but am yet to put strings on it. Otherwise I was looking at the N9.

Would you be able to give me a recommendation of a li ning racket with similar characteristics to the yonex ones I mentioned.

The N90-III comes pretty close to your requirements.

I've not used any of the Yonex rackets you mentioned, but the N90-III seems to suit your list of requirements :)

Give it a try and let me know!

You were right! I ended up stringing mine with zymax 65 at 26lb and it is an absolute pleasure to play with this thing.

It's fast enough in defence while drives and pushes are easily done with a flick of the rest.

Power is great too so I'm glad i bought it.

Now i have another question for you. I plan to get a back up for it and naturally i'm looking at another N90III. But my eye has been hovering around the N9.

Is the N9 really medium flex or similar in stiffness to the n90III?

Hey Vernard, glad to know that you're having loads of fun with your N90-III!

I just tested it for you. The N9 is stiffer than the N90-III, both when swinging and static.

How bout in terms of head-heaviness, which is the head heavier of the two?

Hello! Sorry this came so late.

The N9 seems to head heavier than the N90-III, and the head weight distribution is more at the t-joint.

Might want to take a swing at it to see what I mean. It's a new experience.

Did your arms got tired after playing with n90-III?

Hi i have ordered n90 iii today. Could you please tell me the best string type and pressure i have to use when i want to change the getting afterwards. :)

Can this n90iii be played with plastic shuttles?

@unknown you should use the same string and tension that you're used to on other rackets.. Having a new racket doesn't mean the strings must be different.

@Dravid Yes. All rackets can.

Hi Arthur. I have received the lining racket n90iii. But ivam unable to find to authenticate it. Could you please guide me? The code when i scratched the logo is a 16 digit number. In what way should i enter it?

Glad that you received the racket! I've always bought from reliable sources, and have been able to handle the physical rackets before purchase, so authenticity has never been an issue with me.. usually I just tear off the sticker since I'm on replacement grips..

Sorry that I can't help you there.. perhaps you can head to the badminton central forums for some advice?

Hi Arthur. Thanks for the advice. The racket is genuine. I checked. ☺

Awesome! Have a smashing time with it!

Hey Arthur, is N90iii can be comparable to duora 10? Base on the review this is a very good racket for double.. I want to try this racket too. 😁

Hey there Job, I would think the N90III be a little slower than the Duora 10. Otherwise it'll be a pretty good racket for doubles play.

Also not that sure about the N90III's back court play either.