Hey guys, found out some other site's been taking my article wholesale, so be a sport and bookmark the original site - http://everythinggoeshere.blogspot.sg

This being my first review in such a long time, I'd like to take the change to thank all the readers who still visit the blog and leave real great comments. Racket technology has really stagnated and I've not been motivated to take on new ones, but hopefully that'll change soon.

The Yonex Voltric Z-Force II Lee Chong Wei was the last racket I felt the urge to buy, given the reasons beforementioned. One of the first things that stuck me was the very eye-catching color scheme - the dark pink, blue and gold hues versus the previous matte black and blue streaks.

Now I've always been skeptical about 3U Voltrics. While the series has become the top-selling yonex rackets due to it's immense power and attacking potential, the 3U rackets are notoriously difficult to handle.

From the Voltric 70 to the 80 and the Z-Force , I've always found the lack of total control over my shots disturbing.

This was changed with the Yonex Voltric Z-Force II. I used the 4U version and it was perfect in every way. While I could probably use a little more power to my attacks, the racket offered very little to frown on. It quickly become one of my favorite rackets.

The lack of power quickly caught up, especially in my doubles games, and it made me wonder if the 3U Z-Force II would do any good. This coincided with the launch of the Voltric Z-Force II Lee Chong Wei, and I took it upon myself to give it a try.

It was a tough journey, and I know I still have a long way to go before I can tap on the potential of this beast.

Note: This is a review of my experience after using the racket for a few sessions. I am by no means a professional player, and so you should take my judgement with a pinch of salt. I welcome comments of any sorts.

Defense:
The biggest issues I have with 3U rackets is how slow I can get on defense. Being a counter-attack player, I depend heavily on my defensive shots to turn the game around and move the opponent into trouble. Having a racket slow of defense can really mess up my game.

Rackets I've abhorred because of this include the Yonex Armortec 900 Power, Voltric Z-Force, Li Ning N70 and N90-II. When the shots come, I take that few moments more to defend and it all goes downhill.

The Voltric Z-Force II LCW continues the trend of 3U rackets to a certain extent. While the slim head frame and shaft design adds to the aerodynamics of the racket, there's no taking away the extra 4-5g of weight at the front, which considerably drags your wrist down.

Lifts to the back off a smash now become a little harder to execute; the wrist just doesn't have enough power to pull the shuttle higher.

Blocks and drives, however, are amazing. The weight and the stiffness allows me to turn the shuttle straight of close to the net from off the opponent's attack. It's fairly easy to get it right, but having the lifts being nerfed really puts down the array of shots.

Control:
I do notice that I make more unforced areas with the 3U than the 4U. The extra weight adds to the forehands and takes away from the backhand, and it's resulted in a few unfortunate misjudges in clears.

The boost to forehand shots means I can throw out drop shots and drives quickly. The stiffness and the heaviness of the Yonex Voltric Z-Force II LCW allows me to apply more slice to the shuttle and still getting it across. Off the net, the stiffness really helps me judge the tight net shots.

The tradeoff, as I have mentioned before, is the backhand. I've grown lazy and the lack of speed moving back court has made me a rather competent backhand user. However, the Z-Force II LCW, with it's super stiff shaft and no flex, takes the power of my backhand down a few notches. What used to be a back-to-back court straight clear would constantly end up in the third quarter of half of the court.

Add the smaller head frame into the mix, and you've got yourself a very technique-heavy racket. I've going to have to give this guy a lot more wrist time before I'm able to pull off the backhands.

Attack:
The attacks that come off this racket blew my mind off. My doubt from the 3U racket was resolved with the Z-Force II LCW, and if not for the sweet paintjob I'd be using the in doubles more often.

The 3U racket gives me a great boost when it comes to attack. When given the chance to really boot it, the shuttles that come from the Voltric Z-Force II LCW are nearly unstoppable. When you hit that sweet spot and can feel the shuttle stretch the string bed and shaft before being thrown full-force onto your opponent's side, it's awesome.

Drives really shine as well. The straight shots carry a lot of speed and I can't stress enough how important the fast exchanges have become in tournament play. It forces the opponent into a defensive stance without much time to think of the next shot.

The Yonex Voltric Z-Force II Lee Chong Wei delivers very well on the offence, but one you might want to remember is the lack of speed in defense. Put too much momentum into a normal attack (as opposed to a winner) may result in your failure to recover well should the opponent mange to return it.

Looks:
While not a manly color like navy blue or tough black, dark pink exerts a certain professionalism to the racket and its user. The loud color contrast of the Z-Force II LCW gives one the impression that the user knows his game. Made for the World Number One Lee Chong Wei, the royal combinations pays homage to his dominance of the number one spot in the game.  Alluring, courageous, and downright asking to be seen. 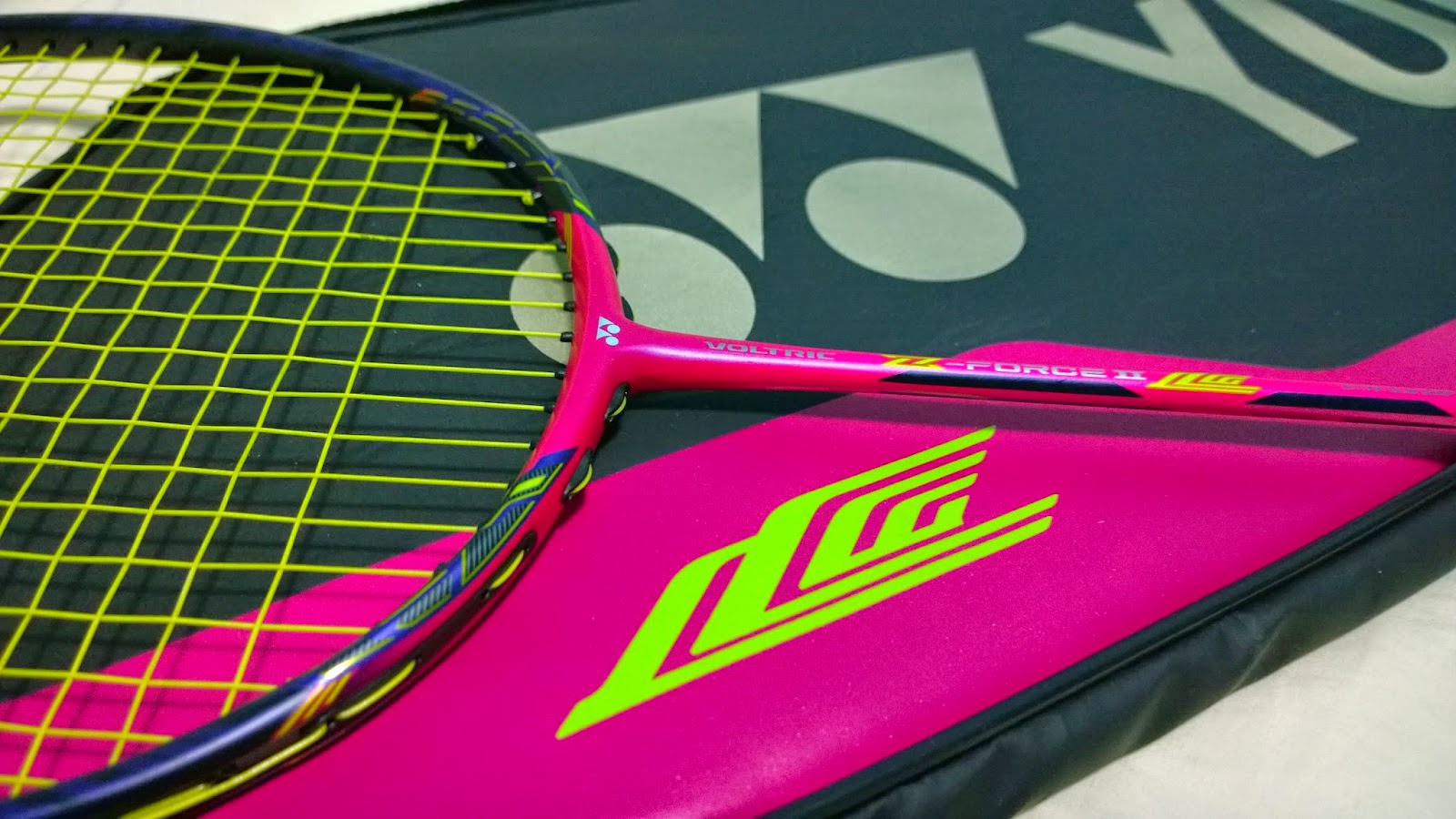 would you be able to write a review on the vt 80 etune. Thanks i really need help on choosing my next racket.

Um I am a singles player . More of control . I would be fine with head light as well as head heavy but not extremely head heavy. could you give me a racket that suits me?

Sorry with the auto correct spelling. I mean state not give.

Hey Richard, I'm going to assume all three posts came from you so I'm answering them all in one single post.

I would go for the Yonex Z-Speed. Works wonders for me when I play singles. I'm not really a fan of gimmicks when it comes to rackets, and the adjustable weight thing really takes the cake.

No reviews about the eTune coming from me I'm afraid.

Thanks I realy wish i could meet you as i am also living sin Singapore around ang mo kio yio chu kang area thanks for the z speed i was considering about it before the etunes came out.

Hey Richard, thanks for the kind words. I actually play at YCK Sports Hall.

Drop me an email and we can have a chat :)

Dear Arthur,
I found this website where you can buy cheaper yonex rackets and you can definetly trust. Just type ' sunriseclick 'which is the official website of yonex. Just like everyone else I am hoping to see more reviews posted out by you.

Thanks for the recommendation Richard! I'm aware of Sunrise Click, but I like to support the smaller boys in the business and head to my neighborhood badminton store :)

Not a lot of options for review I'm afraid - much of the competition has already been put out by Yonex and Victor, sad to say.

Hi Arthur,
if you are aware of chris shop at ang mo kio.It sells cheap rackets. I always get my racket strungbthere with bg 66 ultimax my preffered string for 22 dollars which is quite a fair price.

Not a fan :) I'm with Lim at Sembawang - a short cycle away and less cost for my NBG98.

Havent got a chance to try that shop out. It is opposite ssc one of the terraces .Am I right?

Yeah it is. I almost exclusively go there for my badminton supplies. Close to home and great service.

May I please ask you what grip you use. Eg. Karakal, Kimony,Yonex, Li ning, Toalson ,Rkep.

Hey it's been awhile since I played any badminton, but I'm on Toalson overgrip or Whipper replacement grip. Cheap and good!

Faster. Duora! Duora! I bet they could get it more famous with Dora Lol cant wait to get my hands on those definitely gonna buy it. Hooray!

May I ask why did you score this lower than the regular Voltric z force II?

Well the reviews were for 2 different racket weights. The time I used the rackets were also different.

Hi Shiren, 24lbs is a little uncommon to use on a racket this stiff and head heavy. I have not used the new string so I can't comment on that.

I'd recommend at least a 2lbs increase from your norm to feel a difference.

Is only the cover of it available??? In any sites???

I don't own the internet, so I'm gonna tell you no.

The racket usually comes free if you buy the cover though.

Voltric 80 e tune or energy tune is one of the latest & customisable racquet ever made by yonex. It has the same extra slim shaft as of Z force II & weighs 3gms lesser than Z force. The racquet is available with customisable e tune parts in red which added to racquet will increase the overall power by 10%. There are the golden e tume which is sold separately if added increases the maneuver ability by 10%. Price is at higher side but a if u r a powerful hitter & attacking player it's the best blade u could have.

Voltric 80 e tune or energy tune is one of the latest & customisable racquet ever made by yonex. It has the same extra slim shaft as of Z force II & weighs 3gms lesser than Z force. The racquet is available with customisable e tune parts in red which added to racquet will increase the overall power by 10%. There are the golden e tume which is sold separately if added increases the maneuver ability by 10%. Price is at higher side but a if u r a powerful hitter & attacking player it's the best blade u could have.

Hi Arthur, great blog!
I've been playing for a month with VTZF2LD. Never had a HH racquet before. To my surprise, when it comes to defending from a smash, the weight of the racquet helps me a lot for the control & precision of my reply. Smash? I have to say WOW! It's BAZOOKA!

Downside? When I play doubles in front of the net, this racquet feels like a broom, especially on backhand side and really slow. How would u recommend for the VTZF2-4U version vs NR700RP for doubles? I like stiff frame, and smash a lot in doubles... but don't like to play with a broom :D

Off topic: I had a go with the AT900P on doubles and it was awesome.

As far as quick rackets for doubles go. I'd have to say yes to the Nanoray 900. That guy is blinking! But with a severe drawback of a serious lack of power from the back court. Someone who's coming from a ZForce will really feel the difference.

For a good compromise, how about the Duora 10 or a ZSpeed?