At least 6 hours into using the racket, I'm ready to write a review for the Carlton FX8.

I use this rackets for doubles play.

Defense
The first thing that got me about this racket is the shorter grip handle. I feel this gives me a slightly faster grip change when I go into defense. With the FX8 I found myself blocking smashes loads better, and to better positions to actually cause some damage to my opponents.

(Most might argue about the shorter grip = faster grip change theory, but it feels that way for me anyway.)

Drives are also faster with the FX8; I was punching them back at my opponent a lot faster than usual. And mind you these are controlled hits. Gone are those reaction shots that I return for the opponent to smash.

Attack
Not much to be said except that the stiff flex gives one hell of a smash. The swings come in hard and fast thanks to the head heaviness and light weight.

Control
Before I got this racket I was losing quite badly in net play to my opponents. I tend to get the shuttle too high up or not get them across at all. The FX8 changed all that thanks (once again it's all me) to the shorter grip, which allowed me to switch between grip positions.

Clears to the back take little work (the 3U rackets are better at this of course), and that translates to energy conservation for when you need to up the tempo of the game a little.

Positioning of my hits have also improved slightly, but I'm attributing this to the confidence boost. :)

Looks
First impression counts, and when you get yourself a racket that looks as good as it plays, you win two times! The FX8 comes in sweet lime green and black, white markings trailing down the sides of the frame and down onto the kevlar-infused shaft.

The racket's strung with white strings and grip so it's a nice pristine feeling I'm getting from it.

Comparison
Since I'm a beginner, you'll probably not be impressed with my previous doubles racket, the APACS WREX Punch *laughing in the background*.

The Punch was too light for me, and the the smashes did not come through with enough speed and velocity to cause any threat. I've been toying around with lead tape to upgrade the Punch, but with the FX8 it's all just so much easier.

In terms of attack, defence and control, the Carlton FX8 has not disappointed me yet. I'll continue to try different rackets till I can give a fairer comparison, but for now it's all good for me. 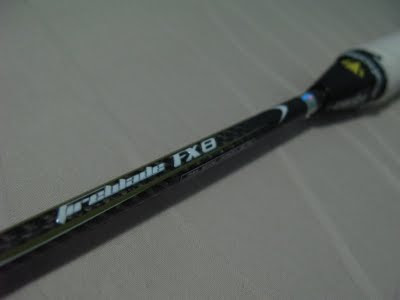 Thanks for this review!

I am from Malaysia and fortunately my brother found one shop here selling the FX8 @ RM220. Pretty good price considerng the FX8 is kind of rare.

And yeah, nothing beats the appearance of carlton FX series.

One more thing..how is the shape of the frame like? Judging from the claims by carlton and by your review, the frame should be aerodynamic right?

fooyoh ...rm200+++
way above my budget
but great review
if you didnt keep repeating that you were not a pro
i would have believe u were one
thanks for the review

Thanks! Stay tuned for more reviews or the rackets I have.

Once I run out of technologies I'll stop :)

I have been using it since last week. Pretty good cosmetic and so is the performance. One of the best in defence (previously my favorite defence racket was Airblade 33 lite, this one is even better), the smash is too. Control is great, I think I will use this for a quite long time since no racket seems able to beat her in reasonable price.

Yeah it's a really good racket! I've noticed the paint job kinda gets chipped off too easily though...

I bought this racket today when I went to actually buy the Carlton Optimax 9.5 or Optimax 28 racket. It just stood out and the power I believe os more in his racket!!!

How are you faring with this now? Upgraded yet?

Hello K, thanks for the affirmation!

I'm glad you've gotten to like the racket! It's still a reliable choice for me even though I've gotten quite a few more rackets since then.

It's got the control and speed that I want, plus the design is simply awesome.

If you're looking for a Carlton racket that's higher in power rating for that powerful smash, you might want to consider a Powerblade 9902. I've got that one and it's worth mentioning.

All the best with your Fireblade!!